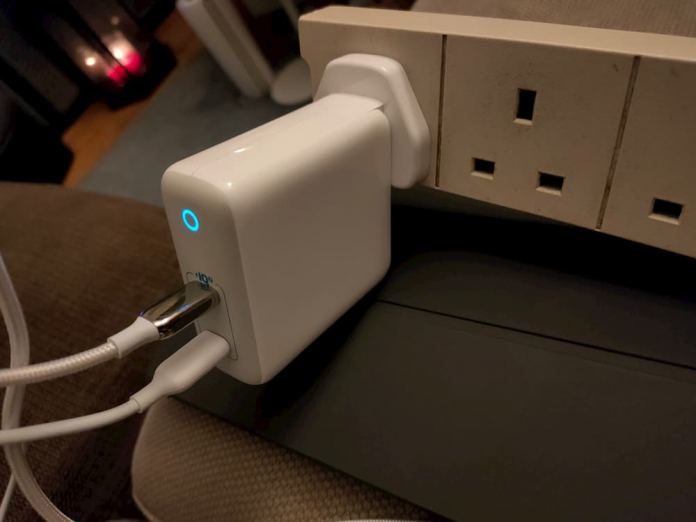 I’m not best happy about this scenario that Apple puts you in as a consumer. They should be providing the minimum bits and bobs in the box for your day to day running of your phone. But Apple has decided to remove charging bricks from all new iPhones sold. They claims this is for the environment but I have my suspicions that there’s more financial factors driving this as a business decision. For now, there’s little to be done except accept that buying a new iPhone probably means you need to buy a new charging brick, so which one is best for you to buy?

What To Look For In A Charger

Not all chargers are created equal. If there was to be any positive about this whole mess that Apple created is that some light has been shone on chargers in general.

Typically, Apple shipped a simply awful 5W charger with most phones, like the iPhone 11. This thing took forever to charger your iPhone. Take Huawei for example. It’s completely standard for them to ship phones with a 40W fast charger in the box. This could get the likes of a P40 Pro charged from 0% to 80% in about 30 minutes.

The iPhone 11 supports 18W fast charge and the new iPhone 12 series supports 20W fast charge so you may as well pick up a charger to get the best charging experience.

Apple has kind of made a stab at the universal charging standard of USB-C. Unlike most manufacturers who’ve adopted the USB-C port to their phone, Apple has just half adopted USB-C on their Lightening cable. This means, if you buy an iPhone 12 you’ll need to make sure you have either an old Lightening charger or a USB-C charging brick for your new cable.

It’s all well and good saying it’s great to charger your phone faster and everything, but it’s essential you can do that safely too. The CE mark is a symbol which tells you the product you’re buying has met European Union production requirements. Basically, it means there’s a far greater chance that you’ll not encounter any safety issues with the product.

This is remarkably important when it comes to phone chargers as they cause countless deadly fires. The biggest culprit is mass produced counterfeit chargers which have not been through sufficient testing. Beware, some chargers bought cheap will bare fake CE marks too. The best thing to do is not only keep an eye out for the CE mark but to buy your charger from a reputable source too.

So without further ado, here’s where to buy your new iPhone charger and the best one to pick up.

As much as it kills me to recommend you doing what Apple want you to do, it’s not a bad option.

This is the charging brick that Apple simply should have shipped with all new iPhones but opted not to. This will set you back €25 and you can simply add it to your order when buying your iPhone 12 online.

The big benefit here is that you’re buying from a reputable source and you’re buying the charger designed for your new phone, right down to the 20W charging spec. You can also reduce the carbon footprint of your charger by getting it shipped with your phone. It’s not guaranteed to ship with your phone but hopefully it does.

Apple’s 20W USB-C charging brick will also work for iPad Pro and iPad Air along with iPhone 8 and up, all of which support fast charging. It’s worth noting that this purchase doesn’t include a cable with Apple assuming the one shipping with the phone is enough.

I’ve been a big fan of Anker for a few years now. The Chinese tech brand promises quality at a great price. A few years back they delayed the launch of a new product because they simply weren’t happy with a safety feature. A competitor beat them to market but it taught me a lot about what the company values.

Anker introduced me to the concept of e-waste at an event in New York a few years back along with their mission to produce the single charger anyone could need. It might sound hypocritical that I support their mission while berating Apple but it’s two very different things.

As luck would have it, Anker sent me a new charger to test out a few weeks back and but I only managed to get my hands on it a few days ago. The Anker PowerPort III is truly aiming to be the only charger you could possibly ever need. With a 60W output, two USB-C ports and IQ3 Power Delivery this charger is designed to power up two devices simultaneously.

The PowerPort III means I can charger my MacBook and iPad simultaneously from a single plug. Power Delivery means the charger is able to send the right amount of power to the right device at the right time. For example, I can charge my MacBook from one port at 60W while charging my iPad at 30W. The amazing thing is that the PowerPort III can actually charge two laptops requiring 60W each at the same time. Mighty stuff.

Anker can be a bit tough to find in Ireland but you can pick the PowerPort III up on Amazon.co.uk for €45. A bit pricier but remember, you’re getting two charge ports. This replaces my horrible MacBook charger and provides another port for various other devices. If you’re not feeling that one, Anker also created the PowerPort III Nano which will set you back less than €20. This smaller charger doesn’t come with a cable and is capped at 20W worth of output but it makes for a great alternative to what Apple is offering.

There are loads of other chargers on the market I’d like to recommend but many of them are 18W chargers. Apple’s move to the 20W standard “for the environment” has actually led to some chargers from just last year looking a lot less appealing, while not quite redundant.