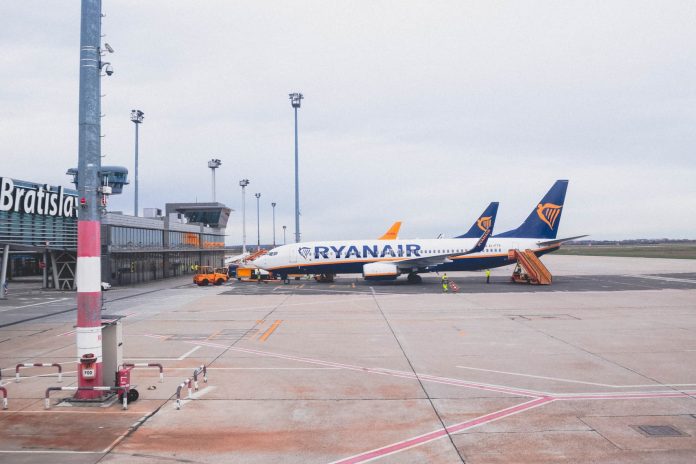 We’re used to hearing about the Ryanair CEO, Michael O’ Leary. I can assure you, the title of this article isn’t a typo. Indeed, this is about SEO or Search Engine Optimisation. Right now, the Ryanair website has an issue which is stopping search engines like Google from seeing new content the airline publishes. But what exactly is going on and why has Ryanair added this single line of code asking Google to ignore them?

What Is SEO: Search Engine Optimisation?

Some companies hire people dedicated to ensuring their website appears as high as possible in search engines like Google when customers search for certain queries. It’s a job that’s part strategy and part technical. This means when you have an SEO in your company, you have someone who can influence where your website ranks in Google.

This works both ways. By that, I mean their work can either make your site appear more or disappear from Google completely.

Nearly every website in the world has a file on it which is publically accessible. Try it out yourself! Just go to your favourite web site’s homepage and add “/robots.txt”. The file that opens is a relatively simple text file full of instructions to search engines like Google. SEOs and developers use the robots.txt file to request search engines to ignore page updates and new content.

On 8th May, someone updated the Ryanair robots.txt file with a simple directive. The change was spotted by Dublin-based SEO, Francesco Baldini, who turned to Twitter to spark a bit of discussion.

Lowercase, no other content, like it was a rush action. Is this a way to reduce booking (& refunds) b/c of Covid-19? Not sure this is the best solution.

I am open-minded and listen to other people's opinions pic.twitter.com/9NK69lGbxO

This is where I heard of what was happening and I was intrigued because I work within the world of SEO myself.

The directive which was added to the Ryanair website tells Google to stop checking the entire website.

Using another website called the Wayback Machine, which shows you what the internet used to look like, I could see what this robots.txt file looked like before the change. 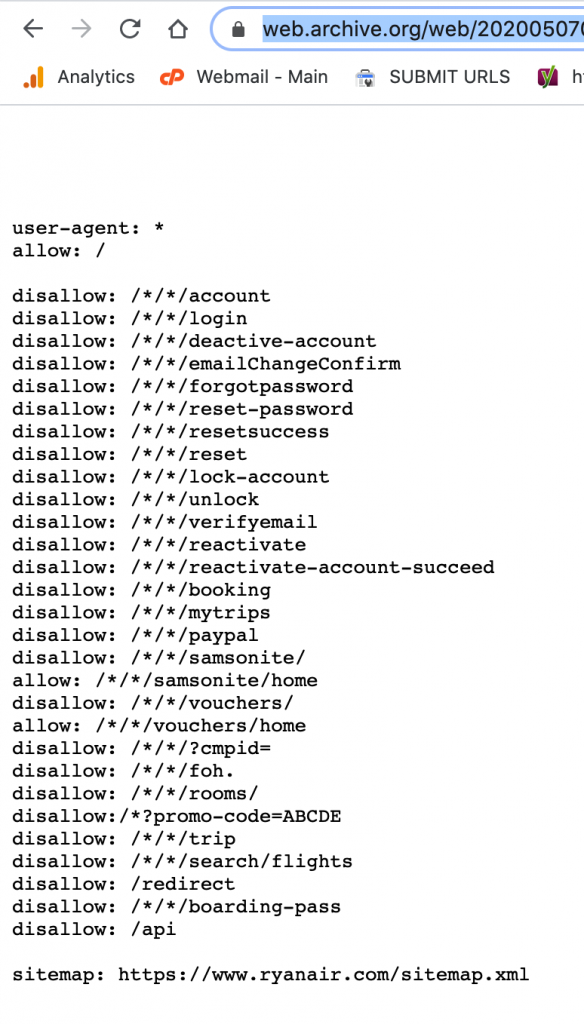 You don’t need to understand this. I’m showing you, really, just to display that a dramatic change has taken place in Ryanair’s robots.txt file. But why? And why should anyone care?

What Impact Will This Have On Ryanair?

Most importantly, this change doesn’t simply make Ryanair disappear from search engine results like Google. Just last week, Linkedin vanished from Google completely. This was after a Google algorithm update but the cause was much sillier and was completely Linkedin’s fault. Using an SEO tool provided by Google, someone in Linkedin removed the entire website from the index.

PSA: Removing the "http://" version of your site will remove all variations (http/https/www/non-www). Don't use the removal tools for canonicalization.https://t.co/yTfRzWZGtd

The change which has been made to the Ryanair website only requests Google no longer check the website for content updates. Over time this will almost certainly impact the number of times Ryanair appears in front of customers unless the change is reversed.

Technically speaking it stops Googlebot to see the pages, so what's already in the index doesn't disappear but G shouldn't see the updates. And stop considering any hits/directive they would add.

Why Has Ryanair Updated Their Robots.txt File?

This is baffling. The robots.txt file is often used by developers to hide a website when it’s being built. Sometimes, this doesn’t get updated after the website gets launched and it’s forgotten about until an SEO is hired and spots that a change is needed.

So why has Ryanair made a change to their website that hides it from Google and other search engines too? I’ve reached out to Ryanair for an official statement, but there are some theories and speculation on Twitter already.

The travel industry has taken a big hit as a direct result of Covid-19. The man who discovered the change, Francesco, theorises that the change could be a way to reduce bookings and refunds during a difficult time for the low-cost airline.

This does seem unlikely given the airline is still running sales campaigns. I received an email for one just this morning. Also, as I mentioned above, this change wouldn’t remove Ryanair from Google in the short-term. Instead, it would hide new pages from Google and perhaps lead to pages disappearing from Google’s index and certainly lead to reduced rankings over time.

Ryanair Sacked An Employee With The Power

If you think it’s crazy that such a simple file can have such a big impact, most SEOs are right there with you. Making a simple mistake in the robot.txt file could have a long term impact on a website. It keeps SEOs up at night. But still, you need to be in a position of power with access to some areas of the Ryanair website which are well and truly under lock and key. Most SEOs wouldn’t have direct access to amend a robots.txt file. Instead, this right is reserved for developers. These are the people who amend the fundamental code of the website.

Luke Fitzgerald, of Right Fitz SEO, points out that yesterday Ryanair announced they would cut 250 office-based jobs. The airline stated, “these people will not be required to return to work on 1 June, when the Ryanair offices reopen, due to the substantial decline in traffic the Ryanair Group Airlines is facing in 2020”.

These jobs are based in Dublin, Stansted, Madrid and Wroclaw with the cuts resulting from a combination of contracts ending, resignations and redundancies. This absolutely makes it possible that a developer with access to Ryanair’s robots.txt file was less than pleased to be let go and then added this directive as revenge.

Exaggerating The Impact Of Covid-19

These causes are very plausible but there are countless other possibilities too. In the world of SEO, it’s just such an unusual move to add this directive to your robots.txt file without a really good reason, I have to assume there’s a really unusual story here too. Another theory and I’m going to really stress this is nothing more than a theory, could be that Ryanair is using website traffic to demonstrate the impact of Covid-19 on the entire business.

Ryanair does not currently stand to benefit from any bailouts of airlines. However, they are challenging that to ensure should bailouts be offered to airlines that the no-frills airline gets their share too. As a theory, it can’t be ruled out that Ryanair wants less website traffic during the month of May and June to exaggerate the impact of Covid-19 on the airline’s website.

I will once again state that this is a theory. I have no idea of what requirements are behind the scenes when it comes to these government bailouts and whether or not they’ll even happen.

As I mentioned, I’ve reached out to Ryanair for an official statement of this matter and as soon as I get an updated, I’ll be sure to update this article.