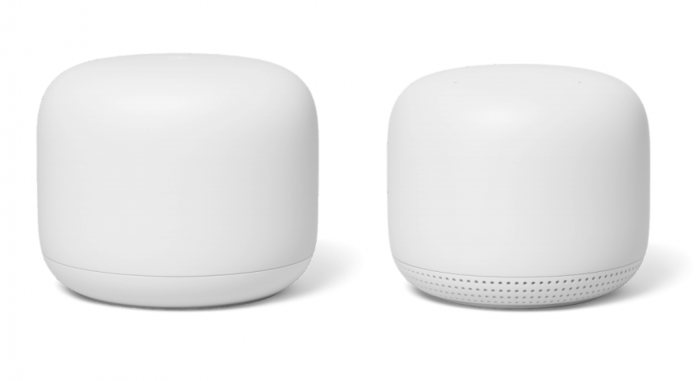 How aware are you of your internet speed right now? With the world in isolation, we’re all staying surprisingly connected. That is, once you have a decent internet connection. Whether it’s a video call with family or dialling into a work meeting, the internet has become more important than ever. Google has conveniently just launched their new Google Nest WiFi in Ireland and it promises to deliver better WiFi in your home. Google sent me over a kit last week to test out and here’s what I think so far.

What Is Google Nest Wifi?

Google Nest Wifi is a small kit designed to improve your internet connection at home. Similar to the Google Wifi I tested out a few years back, Nest Wifi can extend wifi connectivity in the home, but also improve signal too.

Don’t get me wrong, if you have terrible internet speeds there’s only so much the Nest Wifi kit can do. But if you have decent internet speed and a specific room where there’s weak or poor signal, then this might be the solution you’re looking for.

When the system is set up, one Google box next to your modem takes your internet connection and flings it across the house to a second point. From here the signal gets taken in and spit back out again. The benefit of this two-point setup is that you can extend your wifi connection across a larger area. This is called a wifi mesh because it’s like an invisible net of connectivity being spread across your home. There are also benefits in small areas. More on that later.

What You Get In The Box

There are a couple of options when it comes to buying your kit. Most will need the kit Google sent me. That’s a Google Nest Wifi router with an additional point. If you’re in a small apartment, just the router is enough. If you have a big house or maybe want to spread your wifi to a second building, you’ll want to load up on the additional points.

Also in the box is two plugs and a LAN cable. There’s a quick start booklet too, but the whole setup is quite straight forward. Just remember to download the Google Home app to your phone or tablet and you’re ready to rock and roll.

One important point when setting up. The Nest Wifi router point plugs into the modem your internet provider sent you with a LAN cable. If like me, you have a lot of stuff plugged into your modem via LAN, the Nest Home router also has a LAN out port. If that means nothing to you, don’t worry about it. For me, it’s crucial because I don’t lose a LAN port. For most, it’s probably not important.

When To Use Google Nest Wifi

There are two perfect scenarios to use a product like the Google Nest Wifi. Normally, I’d have tested both of these.

I tested out the original Google Wifi device in my Mam’s house and it worked incredibly well. Unfortunately, with the current restrictions, I can’t test drive the new Nest product there but I will eventually. During the setup, the rule of thumb Google gives you is to not place the extra point more than two rooms away from the nearest point so hopefully, that gives you some idea of what it can do.

I did get to test it out in my apartment and was nearly more surprised that I saw fairly impressive results here too.

If you’ve been paying terrifyingly close attention to where I live, you might be wondering why I need a wifi mesh system. The truth is, I didn’t. I really just needed the router unit because I don’t have the square footage to challenge the spread of my wifi signal. I am in an apartment surrounded by other apartments, so wifi signal congestion is the problem. There are dozens of similar modems clogging the airwaves and Nest Wifi offers a solution.

When someone like Virgin Media or Eir send you out a modem it’s set to work on a specific channel. That means when your home is surrounded by dozens of other modems the channels can become congested. Your devices get confused trying to work out what’s what.

Nest Wifi is much more than just hardware. The software Google bakes into the mix is constantly doing it’s best to keep your connection strong, reliable and fast. This includes dynamically swapping channels when one gets too noisy. Google promises that this will reduce the number of times you’re left turning your modem on and off after losing connection.

It’s funny they mention it because I have been having a torrid time with my internet lately and for the past week since installing Nest Wifi the connection has certainly gotten better.

There’s a moment in every review where a product wins me over. I remain critical, but there’s one thing where a manufacturer backs up what they’re doing by delivering on a promise. With the Nest Wifi it was faster internet.

I’m connected to a super-fast Virgin Media modem. Let’s be honest, it’s fast enough for anyone. After several benchmarking tests, my stock Virgin Media modem was delivering  230 Mbps. I’m sorry to everyone down the country now cursing me for being impressed that I improved on that. But when I set up the Nest Wifi system, my average speed increased by 4% to 240 Mbps.

What I want to demonstrate here isn’t that I would generally notice that improvement. I wouldn’t have only for I tested it. Instead, what I want to get across here is that the Nest Wifi system did make a significant impact. Back when I was living down the country I was doing my best to squeeze every Mbps from my network so that 4% hits me deep.

My Virgin Media plan is actually limited to 240 Mb too which makes me wonder. If I went to a higher package, would it get faster without the Nest Wifi? Or perhaps, Nest Wifi helps get the absolute most out of my connection?

As I said, I couldn’t really test the expansive range of the kit. I also don’t have kids and can’t have guests over right now so you’ll have to take my word for it on these features.

On paper, this is beautiful. I assume parents will love it. If your kids have tablets or games consoles, you can assign their device to them. You know have control over their digital lives. I say that with a certain sense of over-dramatics. You can’t read any of their emails or see what they post to Tiktok. You can disconnect their tablet or console from the internet when it’s study or dinner time.

Better still, you can put their devices on a schedule so 7 pm is clean-up time knowing that 8 pm is internet back on time. Once the work is done! Naturally, you can also block adult content too. Nice bit of control for parents built-in.

When we’re back having guests over, no more will there be the 5 minutes of trying to get them online. Nest Wifi lets you create a dedicated guest network where you can keep visitors off your primary network. This is a nice feature for me as I have my own Western Digital Personal Cloud NAS server that I really don’t want any prying eyes taking a look at.

If you have something like a Chromecast you can even pull up a QR code so all your dinner guests need to do is scan your telly. Personally, I’d recommend no internet once we get back to normal dinner parties, but convenience is always nice.

It’s A Google Home Too

I didn’t notice this immediately! The additional point installed in the bedroom is doing more than just expanding the connection and cleaning up signal. It’s also a Google Assistant and speaker. Pretty neat!

This isn’t all that silly a point to make. I’ll admit my Virgin Media modem is pretty nice, but many modems are horrendous. If you’ve got a stylish gaff, the last thing you want is an ugly modem. What do you do? You hide it. The knock-on effect is crappy internet because of the muffled signal.

Google has put some time and effort into the design of these devices so you’ll feel more comfortable putting their somewhere they work well. You can plug the cable into your ugly old modem and leave that where ever you like!

If you’ve made the leap to trying out Google Stadia, which is offering a free trial right now, you’ll also like the priority lane feature of Nest Wifi. Basically, it means you can give Stadia gaming a priority position on the network to ensure you don’t experience avoidable lag.

I’m very impressed by Nest Wifi. It has given me some questions I need to bring to Virgin Media too. It’s interesting that I can only get the capacity of my connection when using a third-party device in the Google Nest Wifi. I’m really interested to try up the network speeds and see what I can squeeze out of it. Keep an eye out for that update!

But all-in-all, it’s a very aesthetically pleasing piece of tech to have in the home delivering some very real results.

While that would suggest Nest Wifi is going to help me get value for money, we do stumble upon my biggest criticism of the whole setup. Damn, it’s expensive. The kit Google sent me is worth €259. Just the router would be €159 and the additional point is €139. I ended up setting up another cheap wifi mesh system in my Mam’s gaff and it works brilliantly. That system costs less than €80.

That system isn’t as pretty. It’s not as user friendly. It doesn’t offer the parental controls or integrate seamlessly with your Google Home App. It also doesn’t have an integrated Google Assistant. For some, that’s a benefit. For others, it makes no difference. Then there are the people who read that list of things that the Nest Wifi offers and they’ve forgotten the price. If that’s you, you will not be disappointed with this setup and the impact it has on your home connectivity. If you’re on the fence, it’s definitely worth a punt. The system can grow with you too. It’s reverse compatible with Google Wifi and can have additional points added to it as you go.

You can buy this kit directly from the Google Store.