The environment is a bit of a hot topic right now. If it wasn’t so serious, I’d smugly reflect on that pun for another few minutes. It’s hard to know if any government-led plan will help tip the scales towards us all doing this planet some good for a change, but the most important thing we need to hold them to account is data. We need to know what the score is so we can know who’s winning. Today, Google launched its Environmental Insights Explorer (EIE) website after partnering with Dublin City Council’s Smart City program and UCD.

How Bad is the Air in Dublin?

Dublin City Council is aiming to be a leader when it comes to climate action and is seeking to improve air quality within the nation’s capital. I’m sure that raises the eyebrows of many, including at least one eyebrow myself, considering the hardship cyclists and electric scooters go through with little support, but you could argue that’s a problem higher up the chain.

Anyway, as I said, if change is to happen, we need to know the score. Google’s new website lets us check in on that.

Google’s EIE website for Dublin shows us that the city is generating a total of 2,130,000 tCO2e per year. That stands for metric tons of carbon dioxide equivalent per year. That figure is arrived at by looking at the buildings which generate greenhouse gas emissions from direct combustion of fossil fuels (like for heating, and indirectly by the electricity the residents and equipment consume.

When it comes to transport, the city generates 1,310,000 tCO2e per year. This figure not only includes the likes of petrol and diesel engines but the electricity required to charge electric cars.

In the hope that common sense can be achieved by Google telling Dublin City Council what is needed, they’ve done just that. The EIE website also outlines suggestions which will directly impact the big air quality numbers. For example, if we want to reduce transportation emissions, Dublin City Council should look to promote electric vehicles, in particular, expanding the city’s charging infrastructure. I can’t help but feel it’s a shame this comes a day after the budget which announced a paltry €3 million for electric vehicle infrastructure in transport while also abolishing the electric car grant. 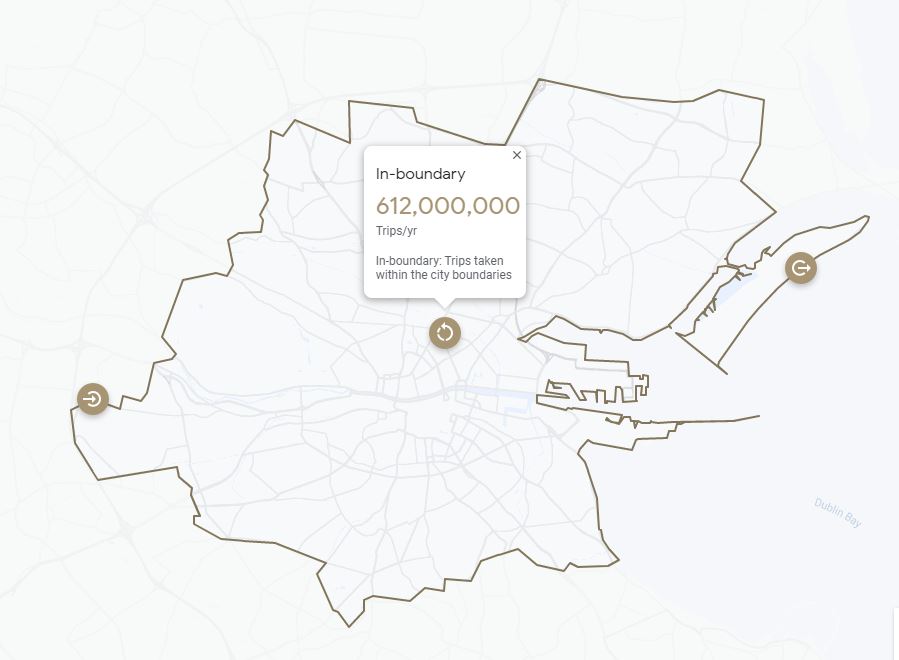 Google’s suggestions also include a car-free downtown. I’m not sure where that would be, but College Green would surely make sense? The plan here would be to eliminate cars from high-density districts while also creating car-free pedestrian zones, limiting vehicles on certain days of the week and implementing congestion pricing. This are rules applied in many big German cities.

Dublin, I’m sorry, but we’ve all got to stop worshipping the car.

Why wouldn’t we just do this? It’s not like it’s the White House solar panel debacle!

Google is spelling out what we need to do to help improve the air in Dublin, so now you can start asking what’s actually been done about it. It’s kind of like when you’re wondering why you’re never losing weight but then you realise it’s because you finally wear a FitBit and realise it’s down to the fact you do 2,000 steps per day! The data matters.

If you want to gain a better understanding of what’s going on here with the data, get on over to Google’s EIE website and have a play yourself. It’s publically available and is crammed with interesting bits of data. According to Google, Dublin City roofs can help us avoid generating 206,000 tCO2e per year. Empty space that just needs a few panels lads. Couldn’t be simpler.