Dublin Pride 2017 has just finished passing by Goos3D Tower and what a stunning parade it was. Tens of thousands took to the streets of Dublin to celebrate equality, in what was one of the most colourful and entertaining events I’ve ever witnessed. It’s impossible to ignore the sheer volume of tech companies that were involved and here are the best ones we spotted.

The world’s biggest tech company celebrated Dublin Pride 2017 with a huge contingent of employees following a double-decker bus adorned with flowers. Google was quite far back in the parade and was headed up by a bit of a gap for some reason, but their energy more than made up for the lull in the parade. 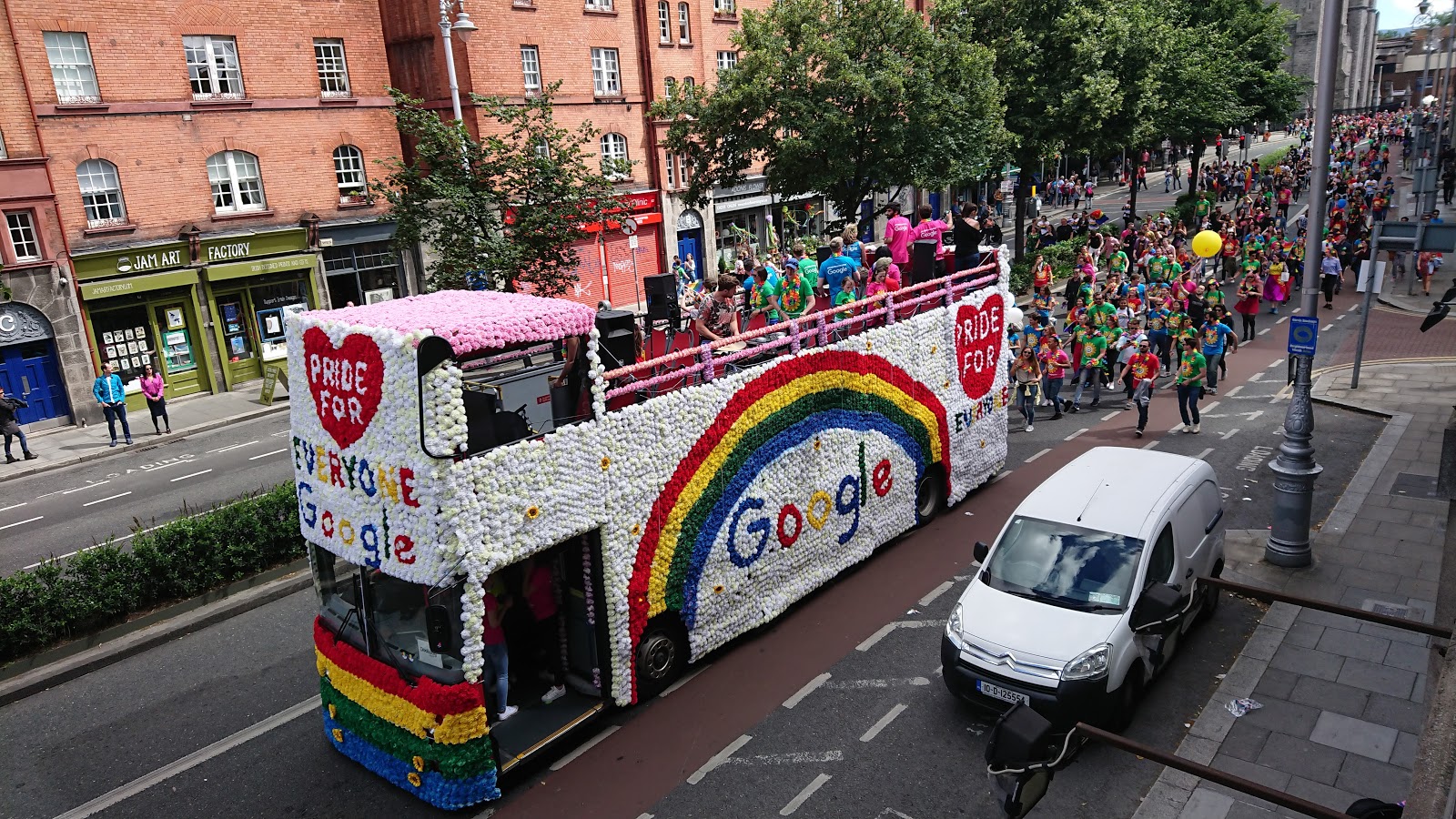 Whether or not the world biggest online store will ever have an actual Irish store or not remains to be seen. Regardless, Amazon has a massive base in Ireland, the vast majority of that office took to the streets in celebration of Dublin Pride this year, some of which were aboard a ‘My Little Pony’ inspired float. 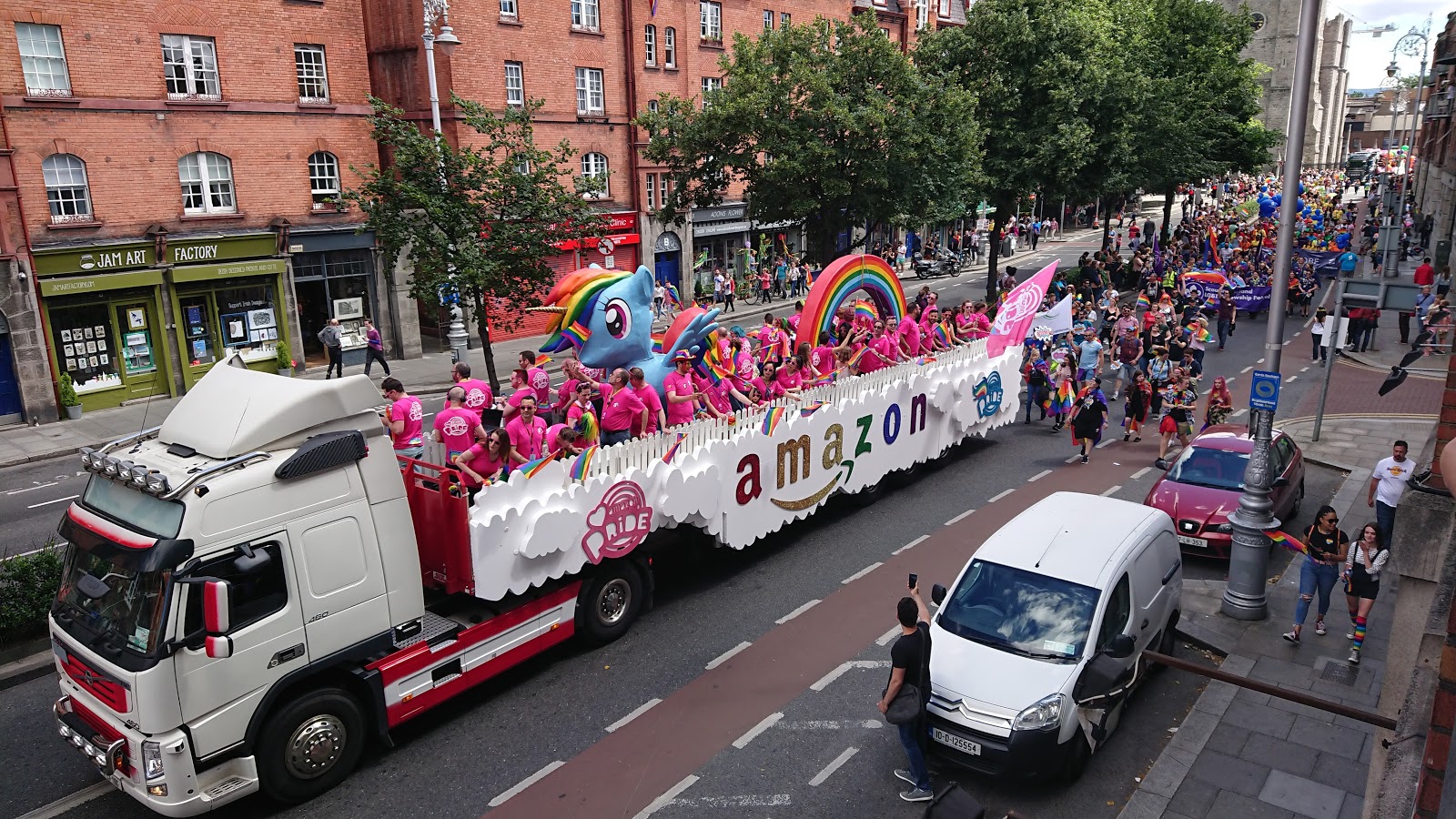 You’re either on Facebook or are on a temporary hiatus from Facebook. We’re spending more and more time on the social media platform than we do in real life. Which makes it even nicer to see so many people out in the real world supporting friends and colleagues. Facebooks float in Dublin Pride 2017 was a massive Facebook logo with rainbow wings. 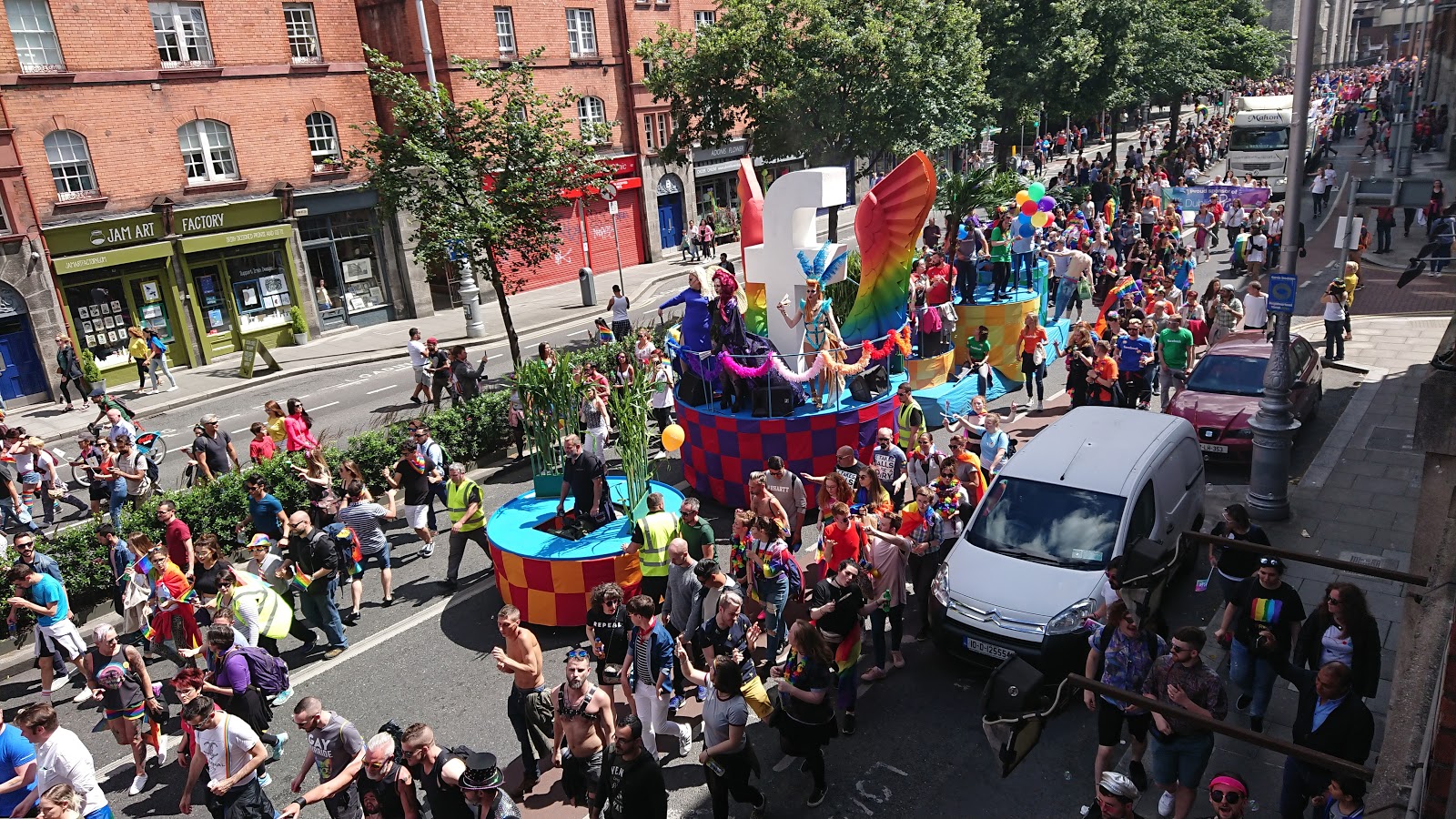 Most people now have a free Dropbox account that’s so full of files and photos, they’ve just abandoned it. The Cloud-storage company pulled out all the stops, renting one of the most recognisable vehicles in Dublin: a Viking Splash Tours World War II DUKW. 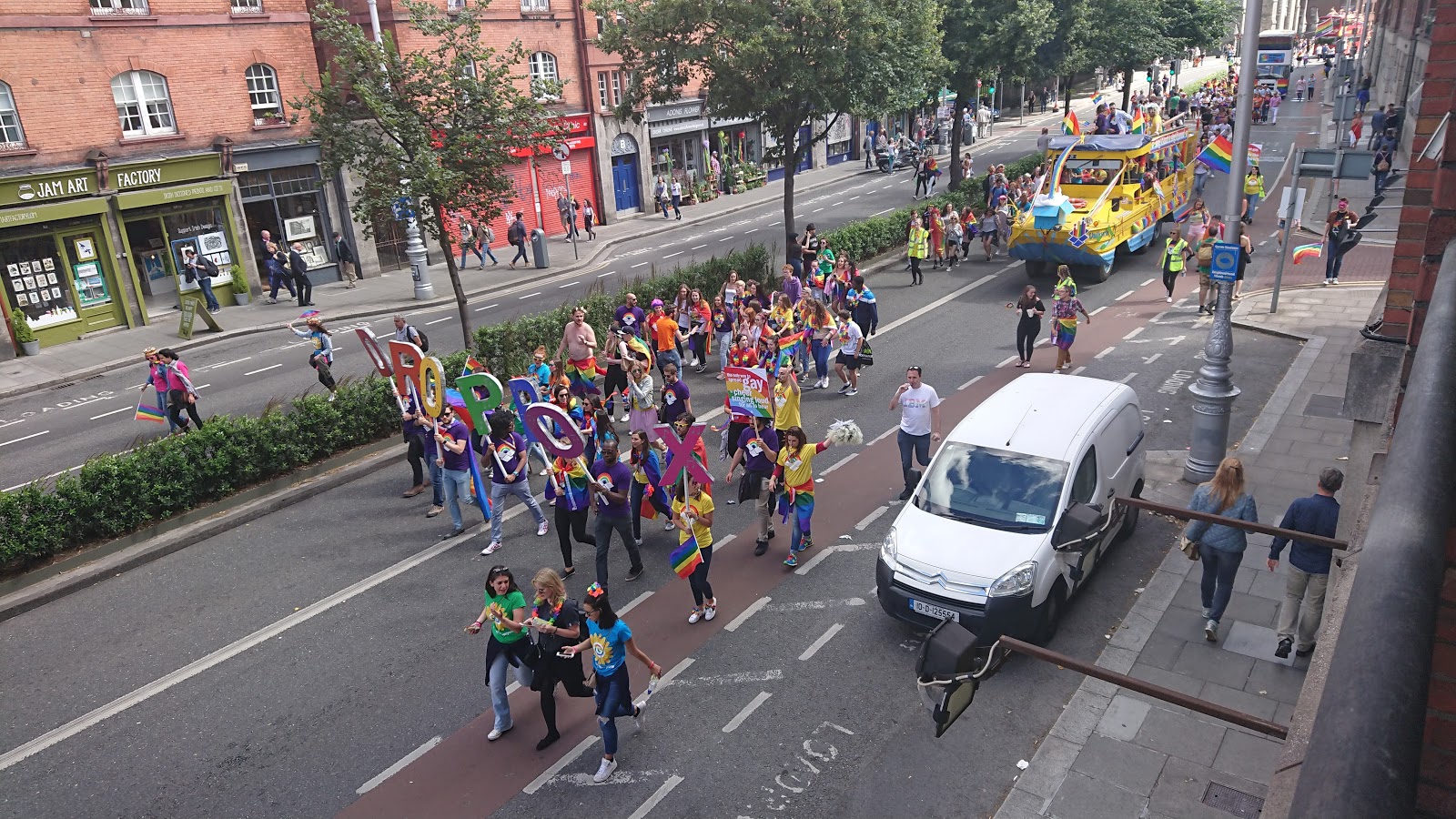 Usually responsible for bringing entertainment into our homes, Ireland’s two biggest TV suppliers brought their flair to the streets of Dublin.

Sky’s own branding fit right in. 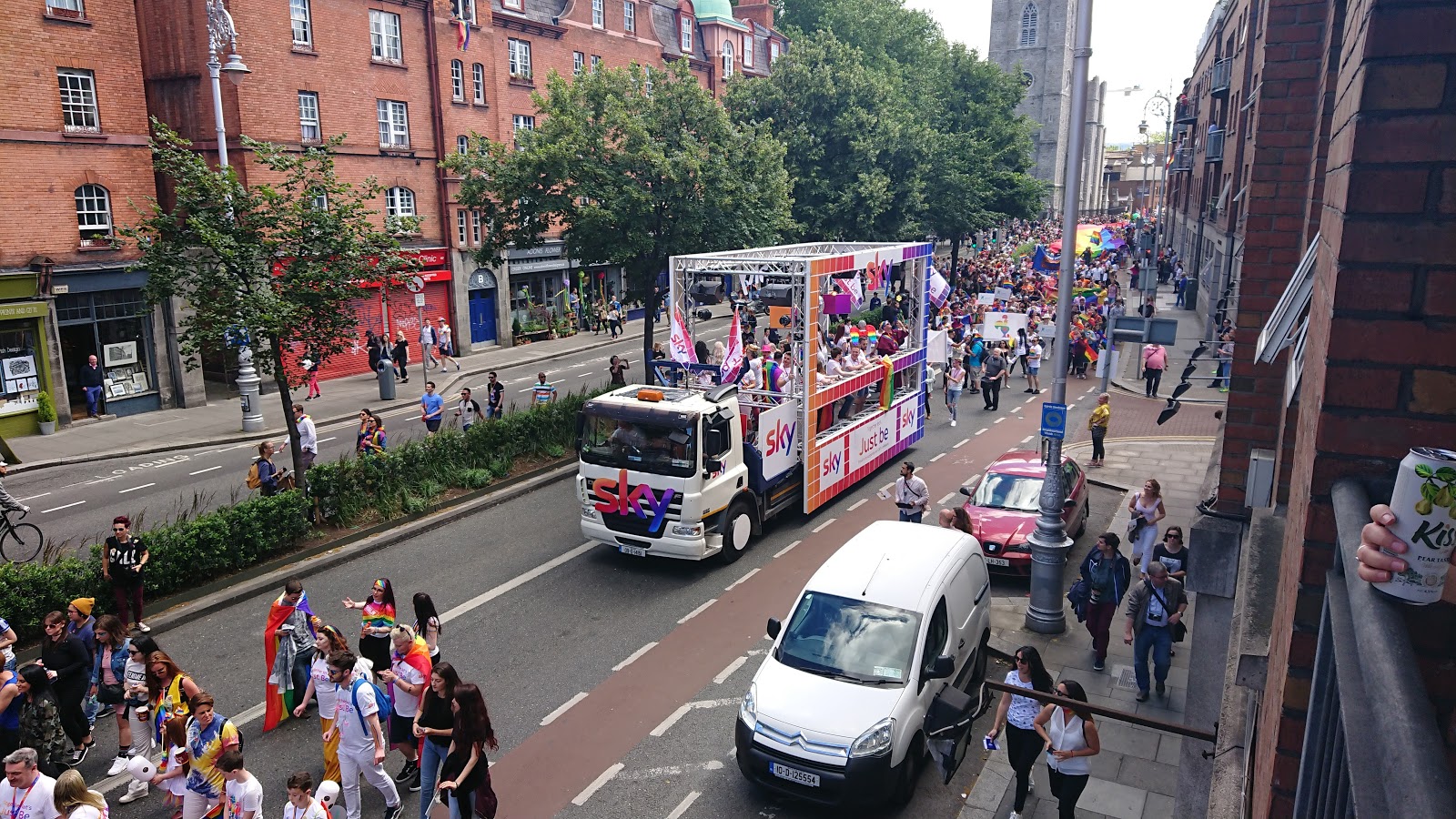 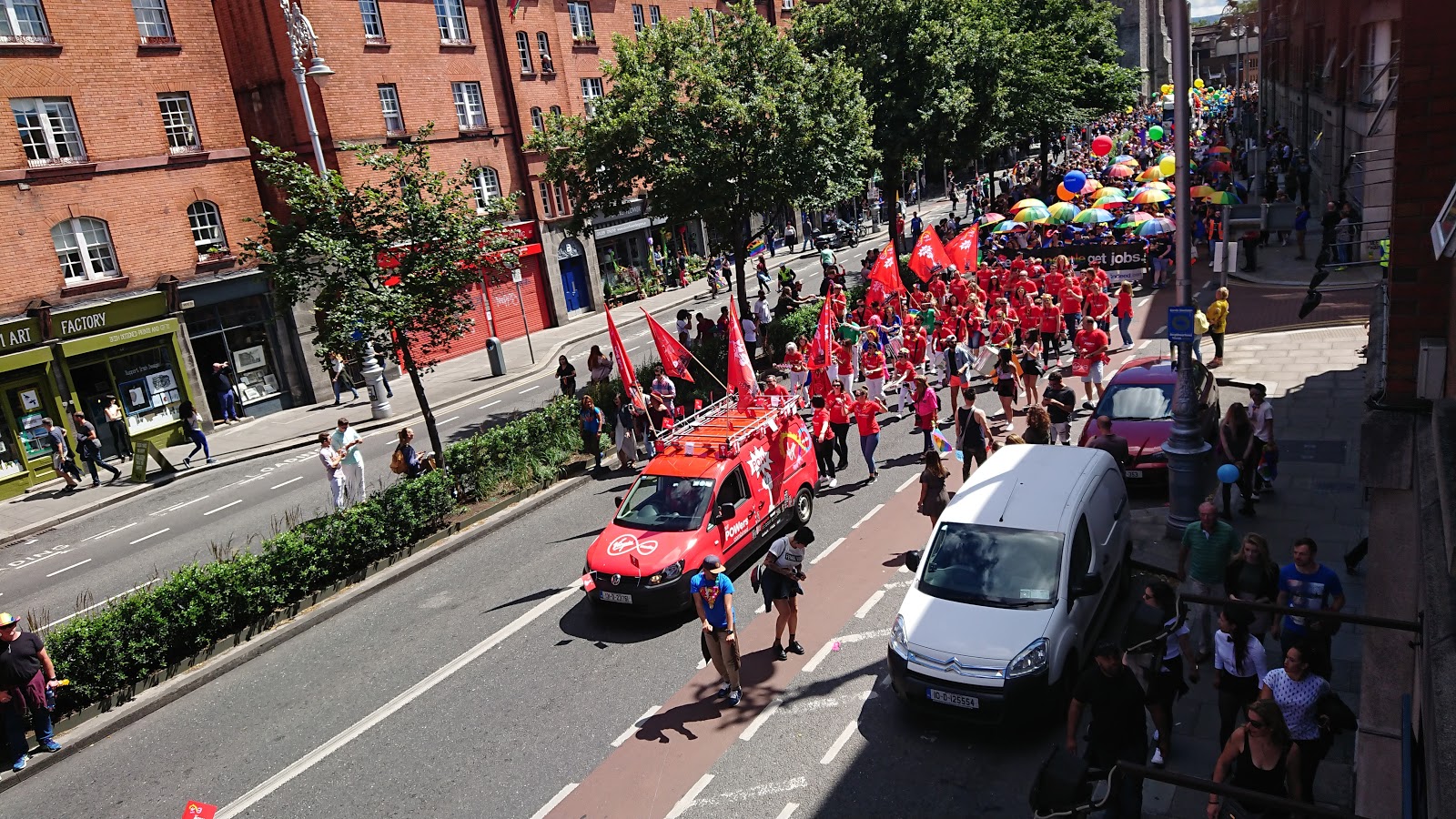 A standout feature of Dublin Pride 2017 was competing companies standing united for one cause.

competing companies standing united for one cause

We saw Sky march close to Virgin Media but the parade also had the likes of Amazon and eBay. These are huge competitors but everyone realises there is more to life than business. 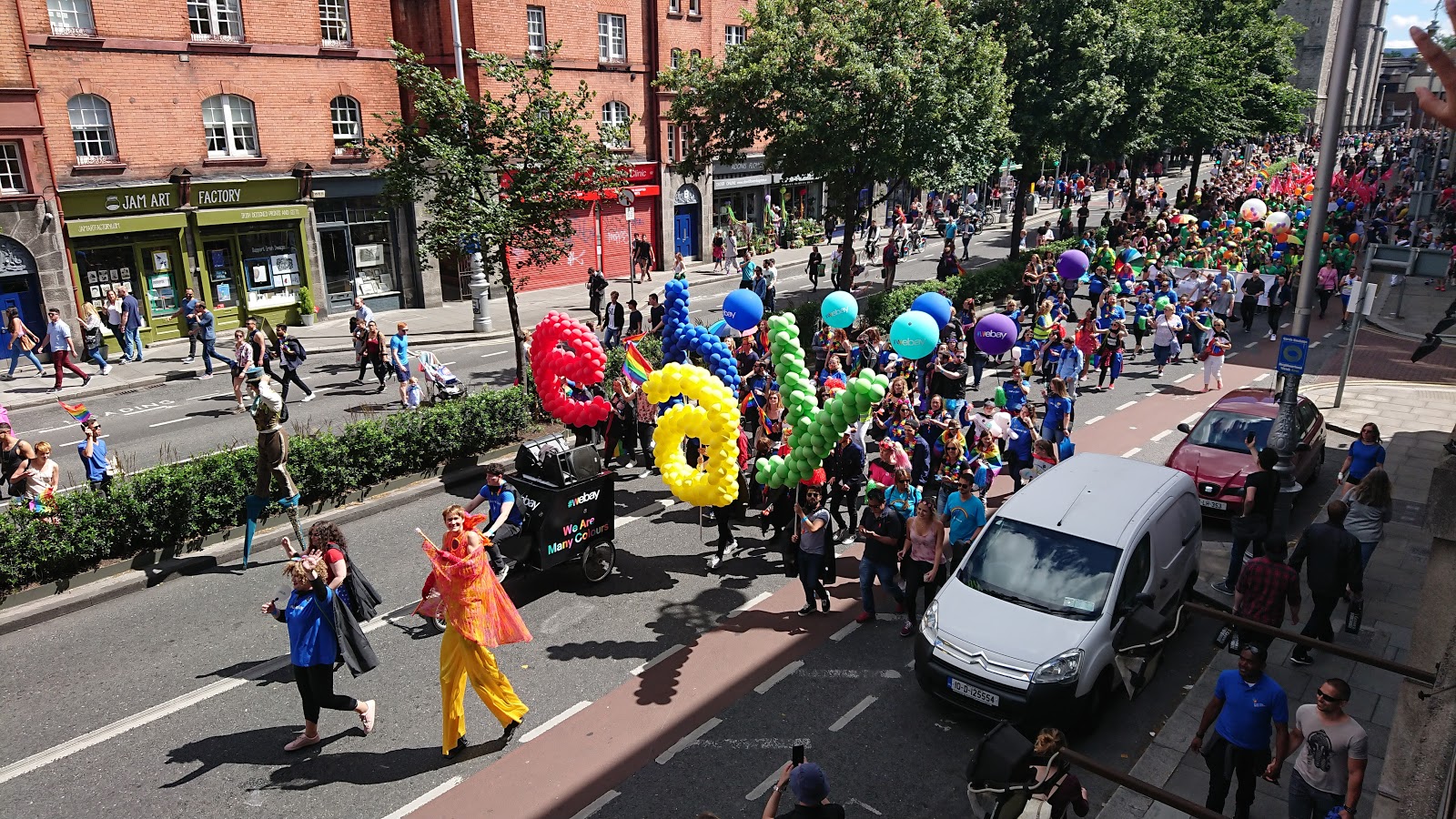 We’re massive fans of disruptive tech like AirBnB, arguably a world leader when it comes to disruption. Disruption in tech means a company changes how we do age-old things, like renting hotel rooms, but AirBnB’s unicorn VW camper van fit right in at Pride. 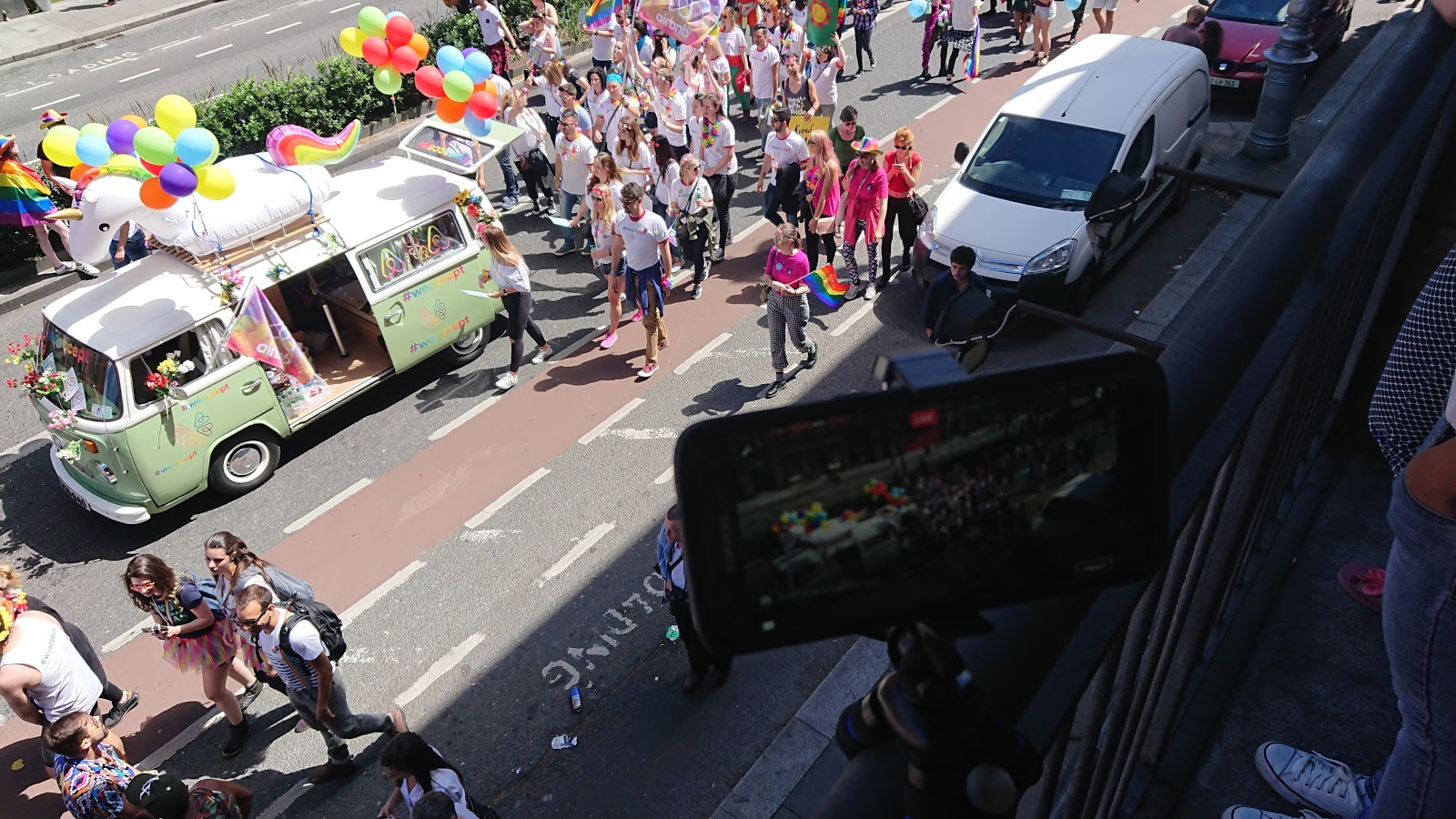 Look around your room. Chance are there’s a Microsoft-powered device somewhere nearby. At Pride, they made up one of the biggest groups. 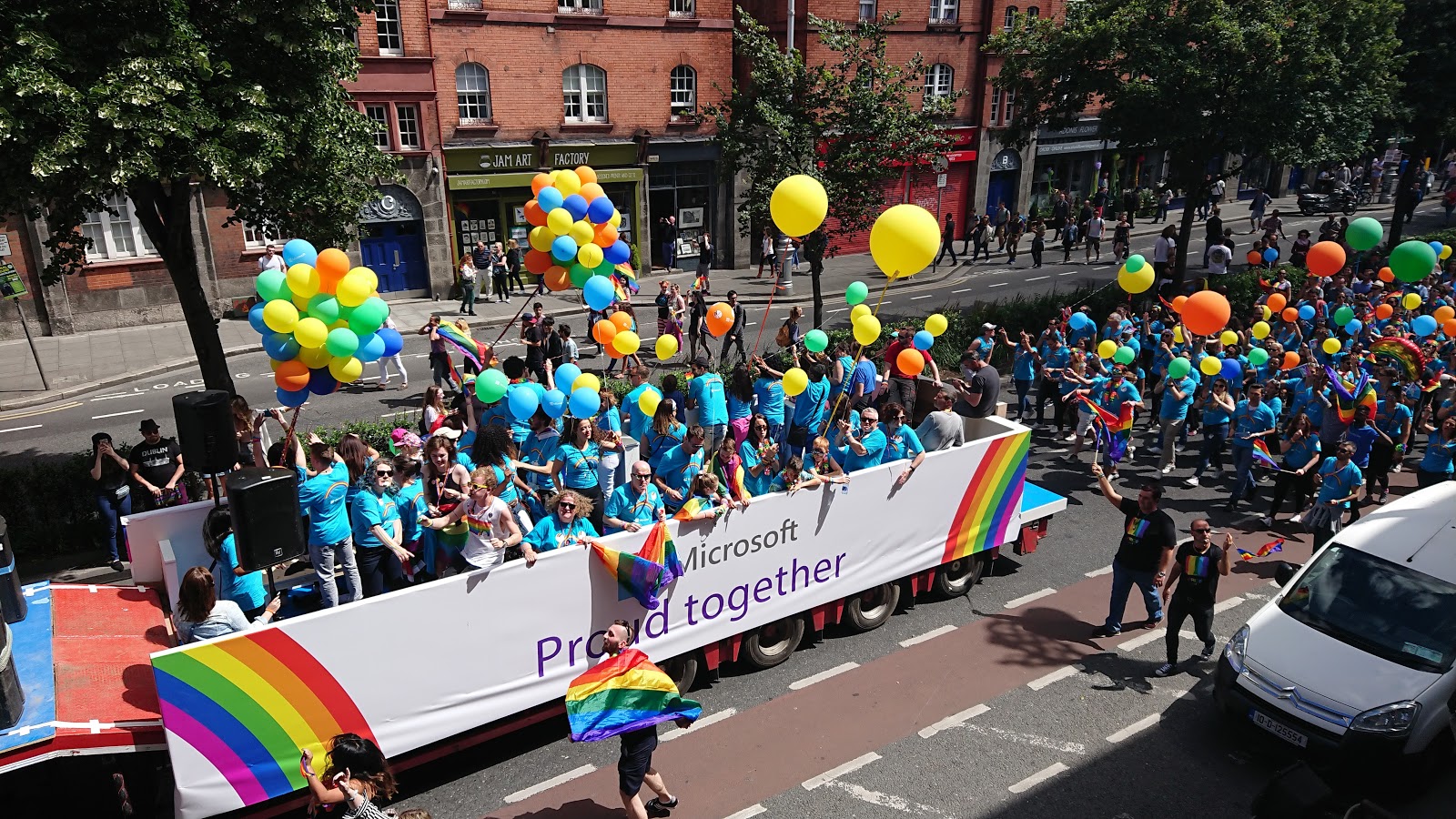 LinkedIn has grown substantially in recent years as people are moving jobs and becoming focused on careers more than ever. The online CV social media platform was out in force to show support for Ireland’s LGBTQ community. 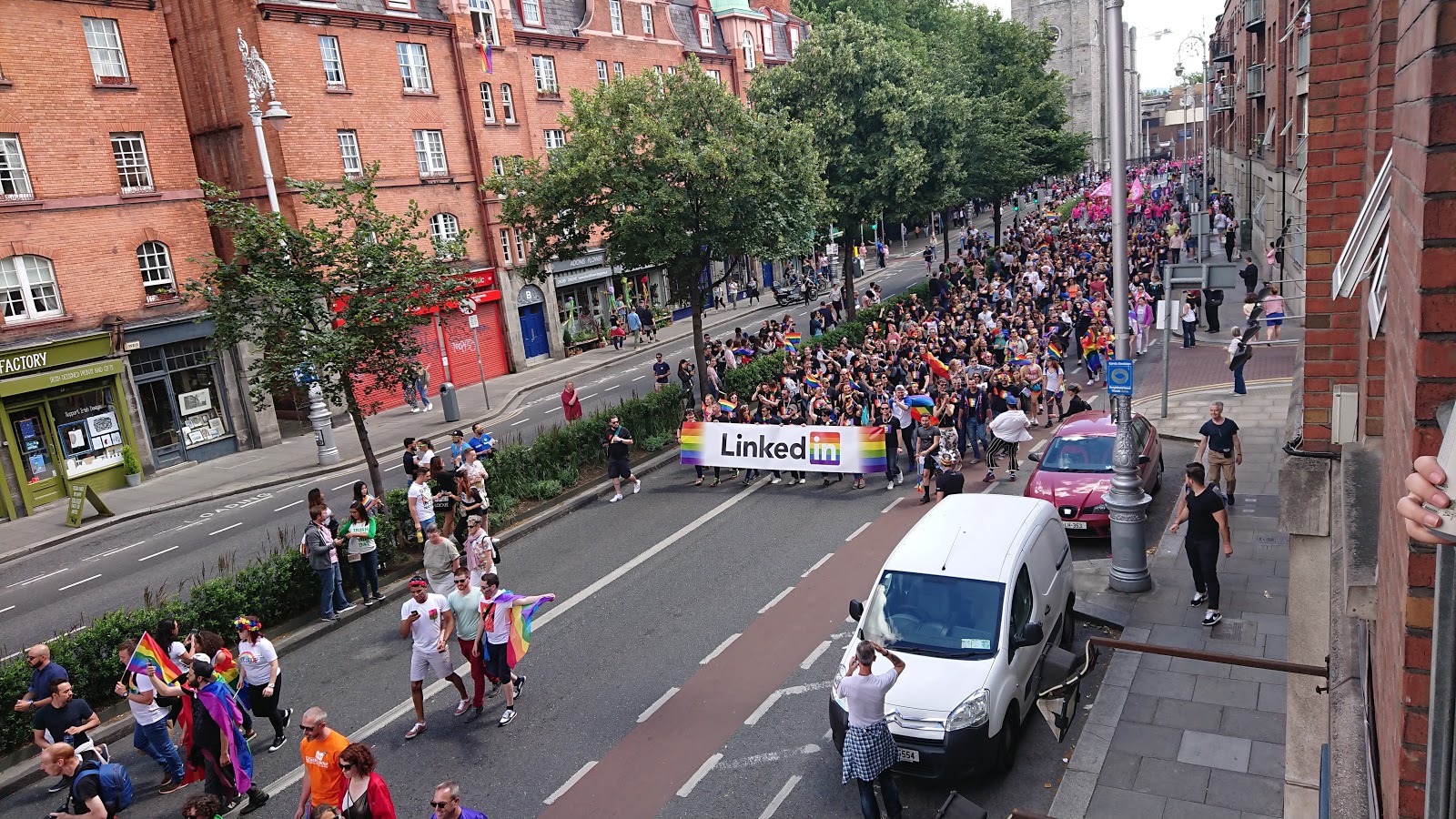 There’s a fair chance you’ve never used Slack, but we swear by it in Goos3D Tower. Slack is an alternative to email communication, popular amongst tech companies. 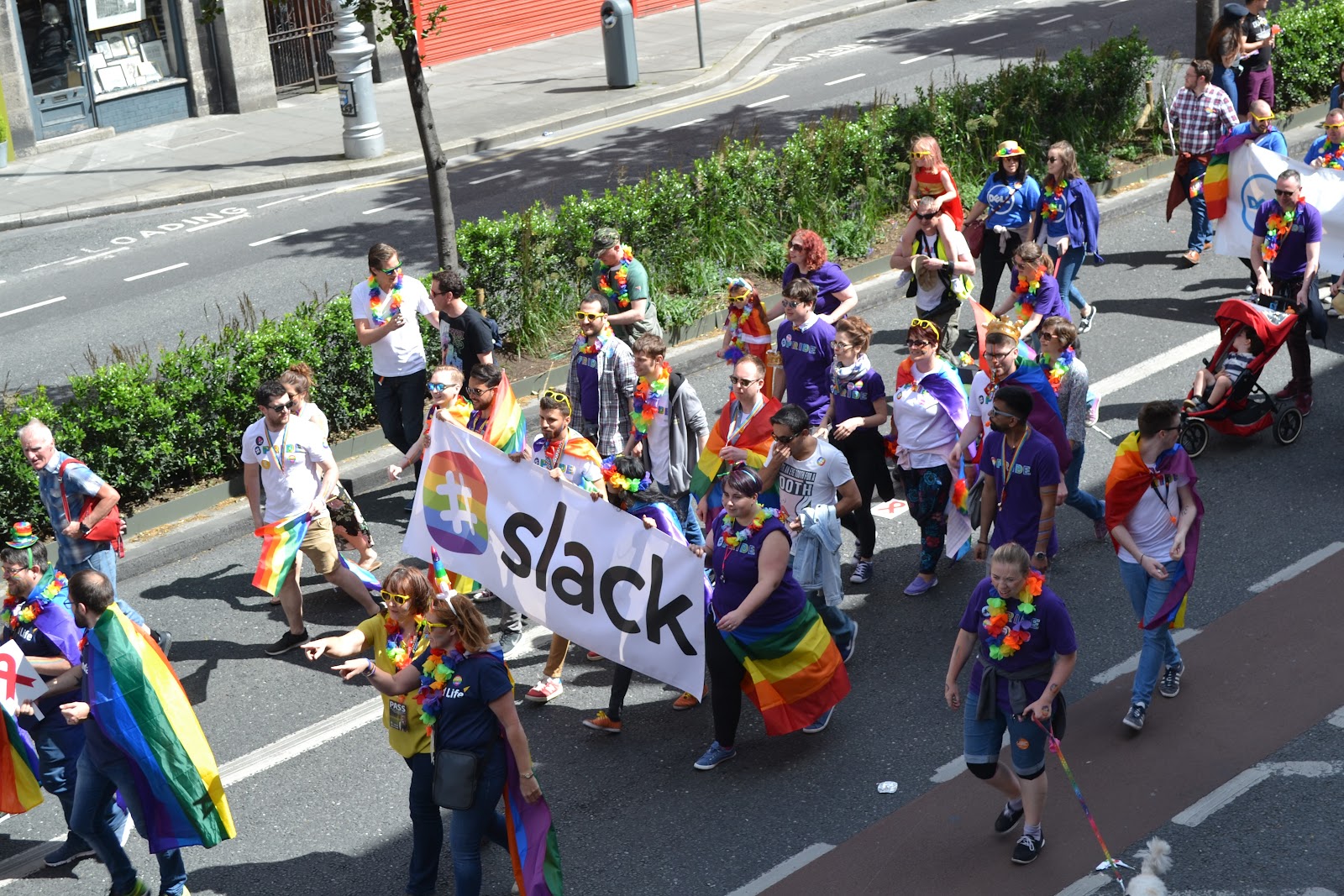 How many experiences and products have people bought purely because it was going cheap on Groupon? I always love that people try something as mad as skydiving because they got it on a discount. People sure do love saving money, even more than full price parachutes. 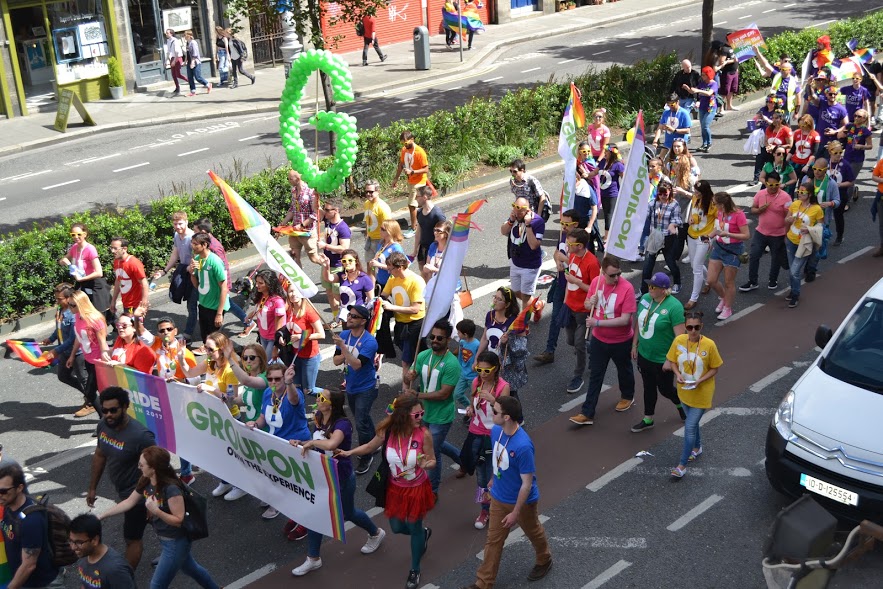 Dell was one of the leading forces in Ireland becoming an international technology hub for the world, opening their first office here in 1990. Primarily in the business of consumer and business hardware, it’s great to see such a large company out in support for Ireland’s LGBTQ community. 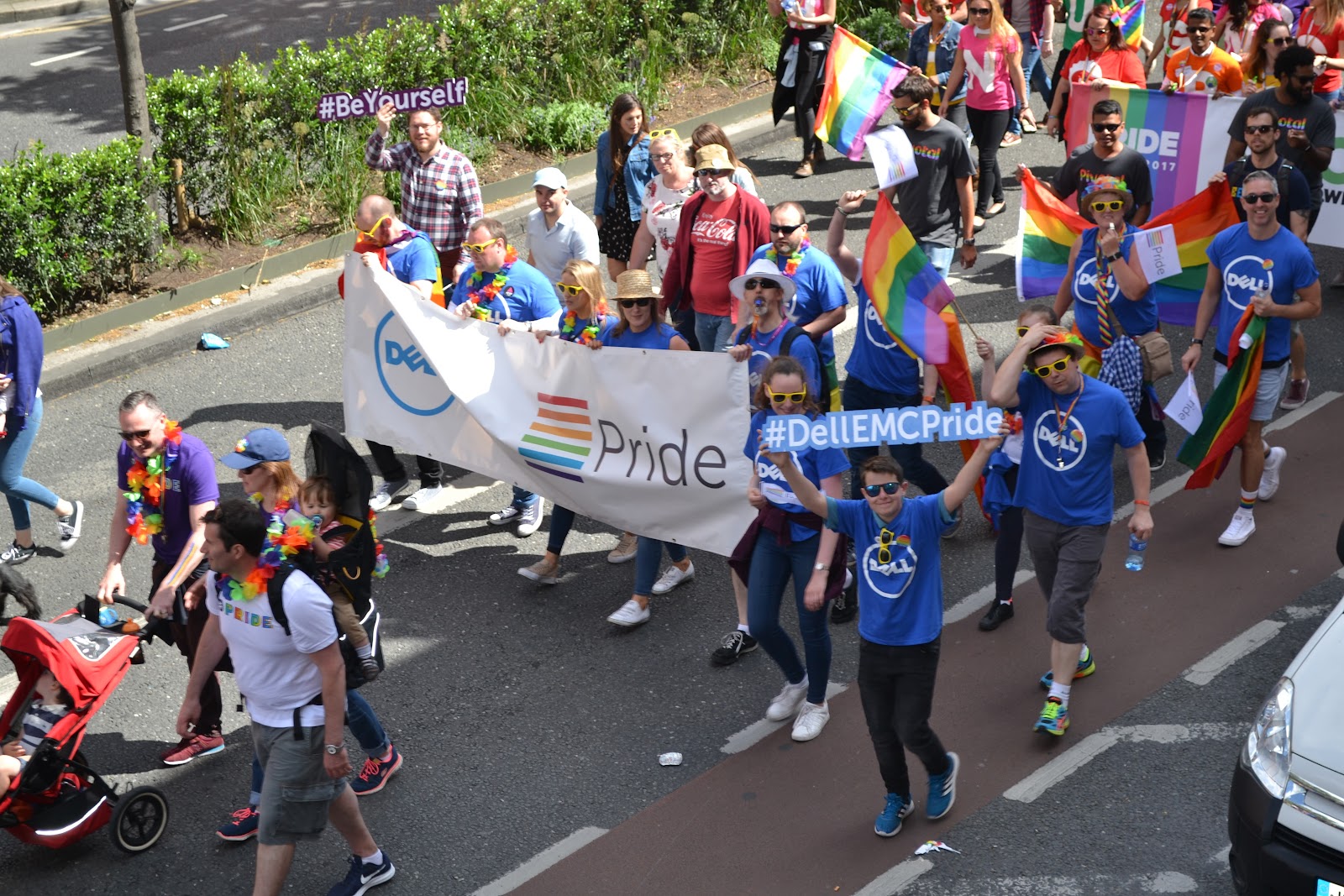 Formerly Hailo, MyTaxi has been through the ringer since rebranding. We can’t help but wonder if there was a poor soul stuck in that taxi picking up the fare while being stuck in extremely heavy Pride traffic! 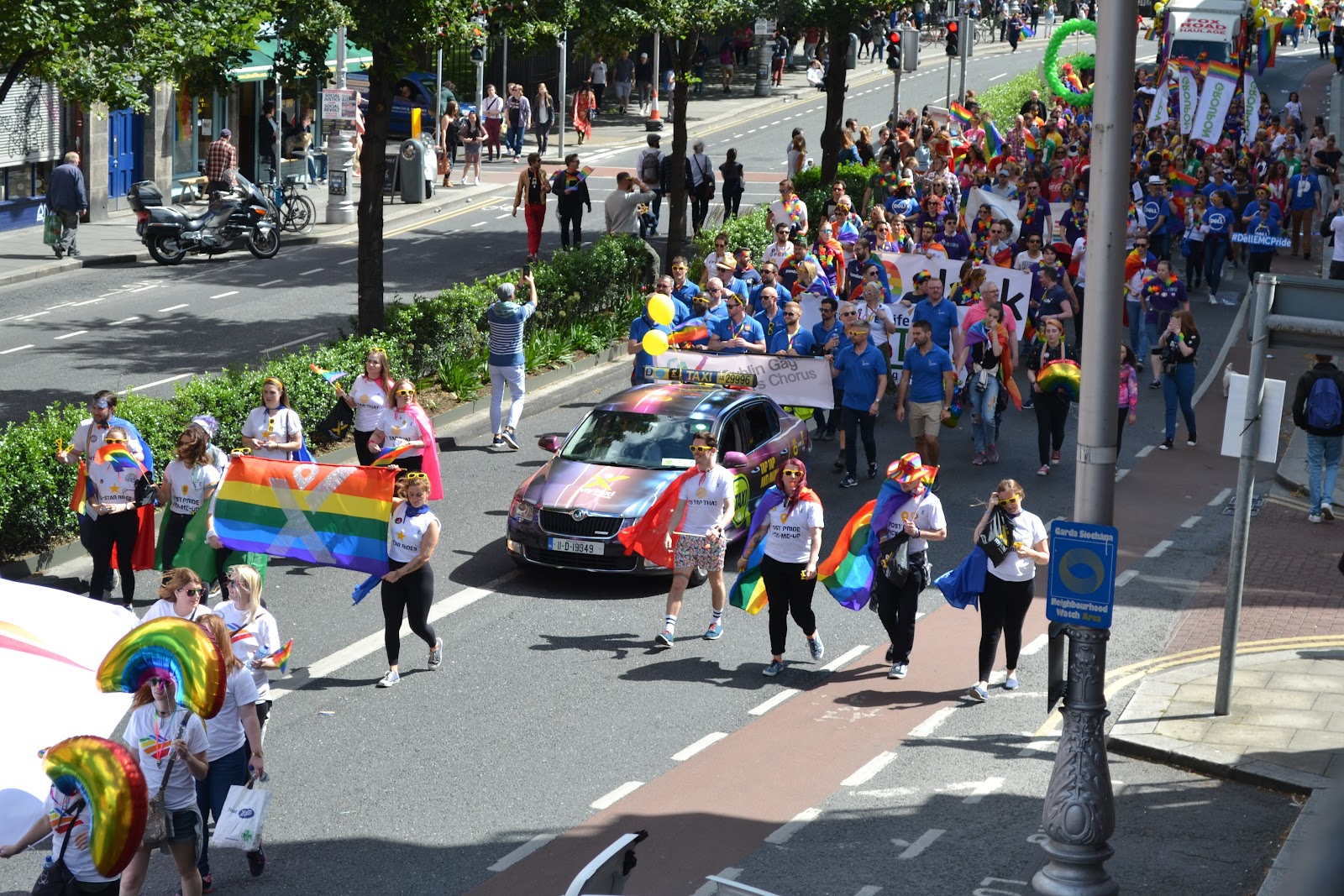 Fintech is blowing up right now with the likes of Lydia and, more recently, Plynk entering the market. Still, PayPal proudly took to the streets to celebrate Pride with a huge group and a double-decker bus.

If you missed Dublin Pride 2017 don’t fret, we’ve got your covered. We were live streaming the entire parade on Facebook and you can watch it back here: