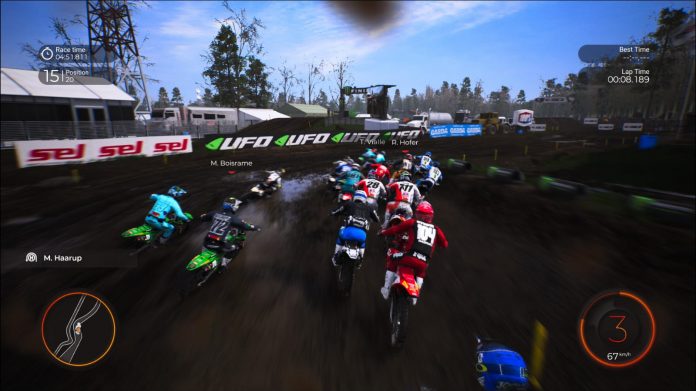 With each new console generation, we take greater and greater steps towards lifelike graphics and realistic physics in gaming. MXGP 20 exemplifies this expertly with gorgeous visuals, an involved physics system, and  colourful level and course design with wonderful details throughout. This is by far the most in-depth, realistic racing game I have ever played, bar none.

However, all this realism may come at a cost to new players who, as I was, might be overwhelmed with the depth and complexity of many of the game’s systems. Also, while visually stunning, this game also doesn’t do enough to take advantage of the PS5’s extraordinary power to set it apart as being a true next gen game.

My experience of Motocross in videogames is admittedly limited to Excitebike for the NES and Motor Storm on PS3 (both brilliant games in their own right) so it’s no exaggeration that when I first saw MXGP 20 in action I was blown away. Racing games are usually held up as the poster children for the new graphical capabilities of new consoles and this game is no exception. I’d honestly be hard-pressed to tell the difference between a real-life marketing photo of a bike and some of the images on the bike selection screen here. The outline and animation of the helmeted rider is also picture-perfect.

What a wonderful world

Each track is also a sight to behold. The tracks made of realistic mud, dust and puddles obviously being the focus of detail but there are wonderful touches everywhere. The grassy areas of some tracks provide some welcome splashes of colour while the dirt that’s kicked up by each racer cakes onto the bikes and riders alike as they tear their way around the track.

Looking through the POV camera really highlights the amount of care that went into creating a living breathing world, even if it did somewhat impede my ability to compete in the race. The cheering crowds aren’t to be sniffed at either. They’re a far cry from the flat sprites that populated racing games of old. Each spectator is its own fully rendered 3D model with its own unique animation cycle. In particular, the animation cycle of the race marshals is over a minute long which is an obsessive level of detail considering you generally only see them for half a second at a time.

Even small touches that I’ve seen before like mud being caked onto the camera to simulate a dirty mask are done spectacularly here making the whole package a visually stunning muddy mess!

The stunning graphics of this game are given lots of chances to shine throughout the game’s many modes of play. From the usual career and freeplay modes to multiplayer and a new and improved track maker, there’s really something for every mood here!

Workin’ hard for the money

As you’d expect, career mode is as straightforward as it gets. Progress through a series of races, mirroring the real MXGP season, winning as many as possible to earn money and glory. You can do this by either racing for a Motocross team or by choosing a real-world sponsor to support you. Either way you’ll be given set challenges and targets for each race in order to maximise your earnings for victory.

Using your hard-earned cash, you can then buy new parts for your bike, or a new bike entirely, as well as cosmetic upgrades for your rider. While it’s quite straightforward on the surface, Career mode offers a lot of depth in terms of the ability to upgrade or tune your bike on a race-by-race basis and even change your sponsor or team in the middle of a season for greater or otherwise more useful rewards.

I want to break free!

Freeplay also makes an appearance in a couple of different ways. There’s the traditional experience of choosing a track and racing in a series or time attack that nearly every racing game has, but there’s also a sandbox mode that is much improved over other entries in the series. This Playground mode places you in a square kilometre of a small Norwegian valley and gives you free reign to do as you please from navigating your way across the fjords to taking part in one of the three particularly challenging tracks on offer.

Track Maker is one of the areas that this game really shines for me. I’ve seen track makers in other games before of course but the sheer depth of options and possibilities here are seriously impressive. Not only can you create the top-down layout of the track however you like as normal (from a vast selection of pre-made sections), but since this is Motocross you can choose the track surface type as well. This time around you’re able to use the natural terrain to your advantage to create a track with slopes and dips that mirror your surroundings. Similar to a Mario Maker stage, you’re free to dip in and out to play through any section of your creation so see how it plays so you can make alterations or finishing touches on the fly.

Pump the brakes for a second

While the core experience is a fantastic emulation of the real thing, MXGP 20 does fall down in a number of areas. The most glaring issue is the load times. There were instances where I was waiting up to 30 seconds for a track to load in career mode which is pretty far off the mark for a next-gen console. It may not sound like a lot but when you consider that games on the PS5 generally have a few seconds of loading or no load times at all it all becomes more glaring. Spider-Man and Demon’s Souls for example are as graphically demanding or even more so and have a maximum load time of 5 seconds in my experience. This is even more unforgivable when you remember that this is a cross-gen game, running on PS4 and Xbox One as well.

Stuck in the mud

However, the far bigger issue, in my opinion, is how little this game does to endear itself to newcomers to the series. As I said, I have little experience with Motocross games. I do, however have good experience with racing games in general. I started MXGP and selected medium difficulty assuming it would offer a challenge but nothing too overwhelming, expecting to finish in or around 10th out of 20 in my first race.

Boy was I wrong. I was launched into highly detailed bike customisation menus that I didn’t understand before starting the first race in the game. Upon which I was presented with a list of controls and left to my own devices. No explanation of how the bike’s parts affect each other, no advice on how to manage my rider’s weight on the bike, not even a racing line that has become a staple of games like Forza and Gran Turismo. I was on my own.

“No worries,” I thought “I’ll just quit the race, reset the difficulty and go again.” No dice. Once you start a race, there’s no way of quitting the game (I understand that this is likely a way to prevent people from cheating by quitting a race they’re doing poorly in, but this should be treated as a forfeit in my opinion). So, I finished the race (in dead last after being lapped) and headed back to the main menu, only to find that I was locked in to my difficulty choice from the beginning of the game.

Through some file management jiggery-pokery I was able to set the game to ”Very Easy” difficulty, hoping that this would offer me some kind of fighting chance. Nope. Still came last in my first race and 15th in my second. I did, admittedly, start to get the hang of the controls on the second, far less technical track (why would the game start on an intentionally difficult track anyway?) but this was over an hour into my gameplay experience and I had been seriously turned off. Had I been offered a tutorial or more information as to how the bike customisation options worked, I may have had a more positive experience, but the game was completely soured for me after that.

But that’s just my personal experience as a novice. If you’re a fan of the series I would whole-heartedly recommend this game, or hey if you’re happy to put in the time to learn the intricacies of the controls by all means go for it! This is an absolutely gorgeous game with a lot to offer the player. The bike customisation options give you the finest level of control over your ride as possible and the track creator will be sure to keep you entertained for hours perfecting the ultimate course for your ultimate bike. Just be warned that this is a game that will take a lot of getting used to for beginners.

A visually impressive game that offers a wealth of content to long term fans and casuals alike. However, a steep learning curve and long loading times may put some players off