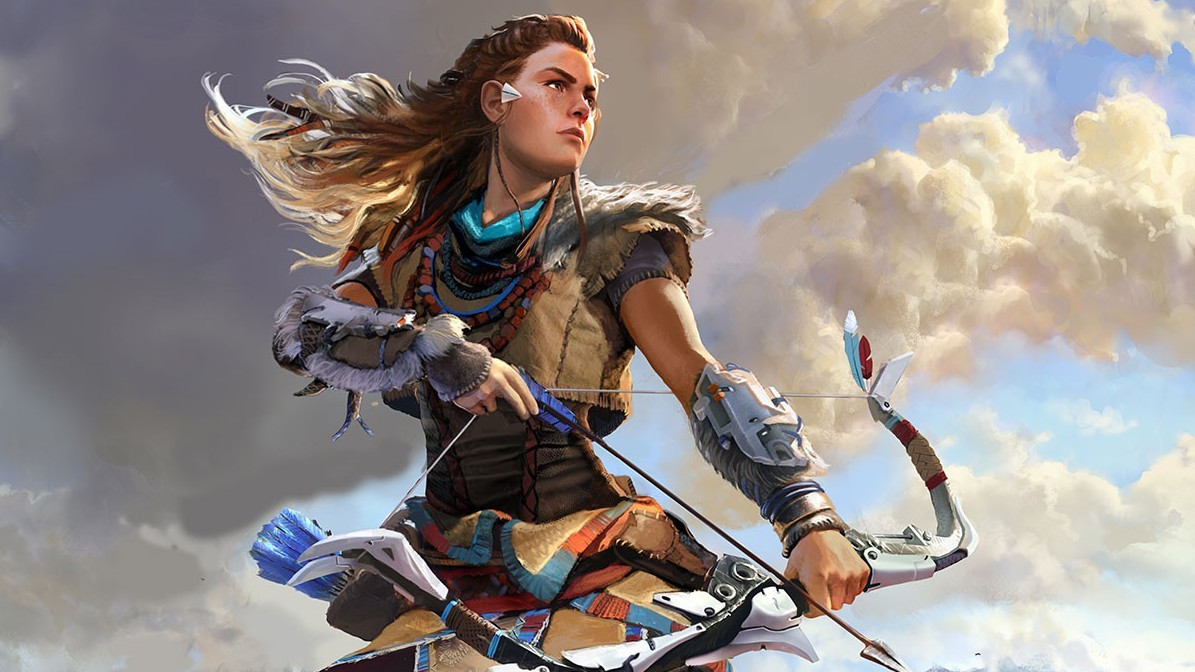 Did I fit enough puns into that title? For those of you who don’t know her, Aloy is the star of 2017’s Horizon: Zero Dawn, one of the best games of that year (and it was an exceptionally good year!). The game itself centered around Aloy, an orphan of unknown origins finding the true history of her parentage and (inevitably) leading her people to combat a world-ending threat. Everything about it was sublime from the way you handled your bow, to the stunning design of the techno-animals to the way it handled the incredible graphical fidelity. It even had a brilliant marketing campaign showing what each city it was being marketed in would look like if it were in the game.

Recently there’s been a lot of buzz around Aloy for a few good reasons, and I’m here to break them down and hopefully get you as excited as I am to see her get here long-overdue time in the sun.

Anyone under the age of 18 will probably be well aware of the news that Aloy will be making an appearance in Fortnite later this week. That’s right, the bow-slinging, robo-dinosaur slaying heroine is paragliding in on her own custom Glinthawk glider. If you buy the skin, you’ll not only get her and her custom glider, but you’ll also get a skin for your pickaxe to make it look like Aloy’s spear.

It gets even better if you’re playing on a PS4 or PS5. Starting now, there’s an event that will allow you to unlock the Aloy skin by eliminating other players and getting as many of those coveted Victory Royals as you can. Every elimination will earn you points, with bonus points being awarded depending on how well you do in the game. Fittingly, if you get any eliminations with a bow, you’ll get even more bonus points! If you’re playing on European servers, you just have to finish in the top 800 players after 10 matches and you’ll unlock all the goodies.

But wait, there’s even more! If you’re playing on a PS5 you can unlock an extra skin for free. Any early adopters out there can get the Banuk Ice Hunter character skin for Aloy as well. So what are you waiting for?

This time last year, Sony decided to do their bit to help those of us who were in lockdown with the Play at Home initiative. The idea behind this was to provide 2 free PS4 games to help alleviate some of the boredom that comes from being cooped up indoors. These games were completely free with no PS Now or PS+. These weren’t the games that Sony didn’t mind giving away, either. The Nathan Drake Collection and Journey were up for grabs. Not exactly obscure gems. Play at Home returned this year with Ratchet and Clank being offered to everyone regardless of their subscription level. A fantastic game that I would recommend to everyone. Get it quickly though, because it’s being replaced with, you guessed it, Horizon: Zero Dawn Complete Edition.

If you own a PlayStation, you owe it to yourself to play this game. As I said, it was one of the best games of the year it came out. The story is brilliant, with natural dialogue and fantastic acting from some big names. The gameplay is engaging and strikes a perfect balance of challenge and reward. The visuals are revolutionary in the way it allows even base PS4 systems to render stunning scenery and intricate monster models in exquisite detail. There’s no better time than now to pick up this masterpiece, especially considering…

We can still be hopeful that Horizon: Forbidden West will make an appearance in 2021. The Pandemic has played havoc with the development of any number of movies, games, and TV shows. In fact, Phil Spence of Xbox said last year that 2021 is when we’d see releases slow down, not 2020. It’s fair to say that Sony was ambitious with their projected release windows for some games they announced back at their PS5 reveal event. God of War: Ragnarök, Horizon: Forbidden West, and Ratchet and Clank were all given 2021 release dates. This would be a tall order in any year given all three would require enormous teams putting in a herculean effort to hit the expected standard. In a pandemic, this goal seemed downright insane. Thankfully, Ratchet and Clank has been given a June 2021 release date, so I’m extremely excited about that. God of War hasn’t been mentioned since so I think it’s fair to say we won’t see that until the back end of 2022 at the earliest.

So where does that leave Aloy’s latest adventure? Well according to PlayStation Europe CEO Jim Ryan we can rest assured that HFW will be out this side of Christmas. This is still only a target, mind, and still subject to change but there’s always hope that we’ll be able to catch up with Aloy and find out what she’s been up to later this year.