In football we love a good ole rivalry. United V City, Madrid V Barca, Celtic V Rangers and of course FIFA v PES. The most divisive and highly contested battle any game console has ever witnessed returns again this year with the release of Konami’s PES 2018 title. Now while I am a self confessed FIFA 2018 man myself, it would have been rude not to give the underdog a run out to see what it’s all about.

Nice little trailer to be fair, and it is clear to see that PES 2018 have got a deal going with Barcelona. They are one of a few clubs who have their real players, stadium and name actually being used, at this rate we might have the full catalogue of panels by 2082.

In the eyes of the most hardened fans the great thing about PES is the fact that first and foremost it is a football game, without the glitz and glamour of it’s rivals. In fact to many PES 2016 has been heralded as the best footy game ever made. The game play, opposition AI and general mechanics took the title to another level. Something which Konami have remembered this year. Forget the showboating, the authentic jerseys and everything that FIFA holds of PES 2018 because at the most basic level one of these is a true thoroughbred of a football game. Hint: it’s not FIFA, PES 2018 gets right to the nuts and bolts of everything that happens on the pitch and it delivers this in spades.

Where PES 2018 excels is on the pitch. Each game is different, the tactics and varied playing styles are clear to see. Each big name footballer is modeled on the real life player, meaning guys like Ibra or Lukaka are powerful monsters who can bully any defender. Take players like Hazard or Neymar and you have a completely different experience, the way the player can control the all with sharp movements is incredible and so realistic and I like it because the player then has to change their playing style according to the players at their disposal. Almost like real football.

Apart from individuals, teams approach games similar to their name sakes. Players can set up in the hyper pressing styles of Liverpool’s Klopp, a counter attacking style straight from the Mourinho handbook or even the hit and hope style of the Irish national team. It’s really cool and shows how far FIFA have to go despite this years improvements. Now as a guy who has a soft spot for Fulham I had a crack playing in the lower leagues and wow the difference between the top tiers players is clear. Try hitting that sweeping cross field 50 yard pass, I dare you. It won’t work so I had to find another way to play, this was a nice change of pace because it just feels real.

Of course there will always be one complaint. There is a monumental difference between forwards and defenders when it comes to their off the ball AI. ‘Keepers are a bit keen on the big save, rather than simply catching the ball. It can become a bit frustrating especially when defenders seem to slip out of position. I noticed forwards, wingers and marauding full-backs make exceptional runs to find space so when your defender won’t track the runner it means goals from crosses are a dime a dozen. Small complaint with a simple solution, keep possession.

While the game play is second to none, we all know PES has plenty of problems and they pop up again in this years version. 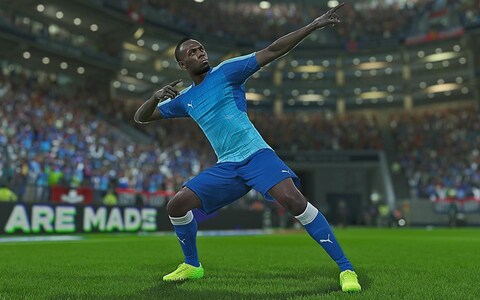 Yup your’e seeing that right, Usain Bolt is in PES 2018. Why? who knows but my guess it’s to try add pzazz and hide the obvious downers. Which there are many!

With the rise of extra gaming modes in FIFA coupled with the amazing game play PES offers it is becoming increasingly difficult to overlook the major issues with the series. The game’s main single-player mode, Master League, has barely changed, save for a ‘Challenge’ mode that makes signing players for your team more difficult. Don’t get me wrong I’ve enjoyed building my teams up from scratch but it looses appeal quickly. While the PES 2018 competition to Ultimate Team is simply weak. Ok Konami wouldn’t have EA’s budget, that’s fair enough but come on I’m not paying €70 quid for a game to be bored in a week.

Don’t get me startedd with the commentary, wow just wow. Has the line ‘too much flesh and blood’ ever been said in a real foot game? No, so give me something a bit more real and substantial rather than attempting to create nonsense cliche’s. Honestly I turned off the commentary after my third game and stuck on some tunes in it’s place.

While again the game play is outstanding, player graphics are not great in comparison to FIFA. Licence agreements are all over the place and the menus come across as clunky. Sadly Konami have had to really on fan made customisation for players to update kits, I mean I get it competing with EA financially is not going to happen but surely if the players can develop realistic kits then so can the developers. Fingers out lads, it’s lazy and I ain’t buying it.

This one is tricky, off the field PES 2018 is actually a steaming pile of horse shit. In the nicest possible sense. The menus are just shockingly difficult to navigate, online modes and general server issues are just not up to scratch, poor graphics in comparison to the competition, idiotic commentary and just all around lacking in general presentation. Despite the PES community smashing it when it comes to recreating unlicensed kits for use.

However with that being said, when you look beyond all that and get onto the game PES 2018 is unreal. There’s just something about the players’ movement and the kinds of arcs the ball makes in the air that’s just so pleasant to control–every pass, header, and shot just feels right. Unlike FIFA where we all see mental goals and severe unrealistic game play at times, PES never has this problem. The tactical set up is something I really enjoyed as this is a pet peeve of mine in other titles it’s the closest feeling you’ll get to being out there scoring yourself.

Soooooooo ya great game of football but all the side stuff and attention to the small details that make up the game are sadly lacking. While hipsters who like to consider themselves sporting purists will continue to support PES the rest of us will keep sitting happy with FIFA. If the closest i’m going to get to playing in the Premier League is through a console I dam well want it to look and feel the part, surely that’s not too much to ask?

While the gameplay is unrivalled, the lack of licencing cheapens the game slightly. Below par graphics and substandard commentary means PES 2018 will remain in FIFA’s shadow a while longer.