It’s becoming harder and harder to ignore the fact that the gaming industry is going through some form of boom with epic titles like Fifa 19, Spider-man and Red Dead Redemption all hitting the shelves around the same time. Now it’s time to add another title to that ever growing list of top games to play this Winter. Over the last couple of weeks I have had the pleasure of test driving the new Assassin’s Creed Odyssey game by Ubisoft and I have to say it’s bloody quality.

Roughly the 20th title in the Assassin’s Creed story, Odyssey boasts an incredible open-world covering the Ancient Isle’s of Greece in stunning detail and with over 50 hours of game-play it’s hard not to completely loose track of time. True story… my first night playing the game I did the usual “Ah, I’ll do an hour, see what it’s all about and hit the hay”, well I was wrong, 5 hours and 15 missed calls later I was finally ready to come back to reality. 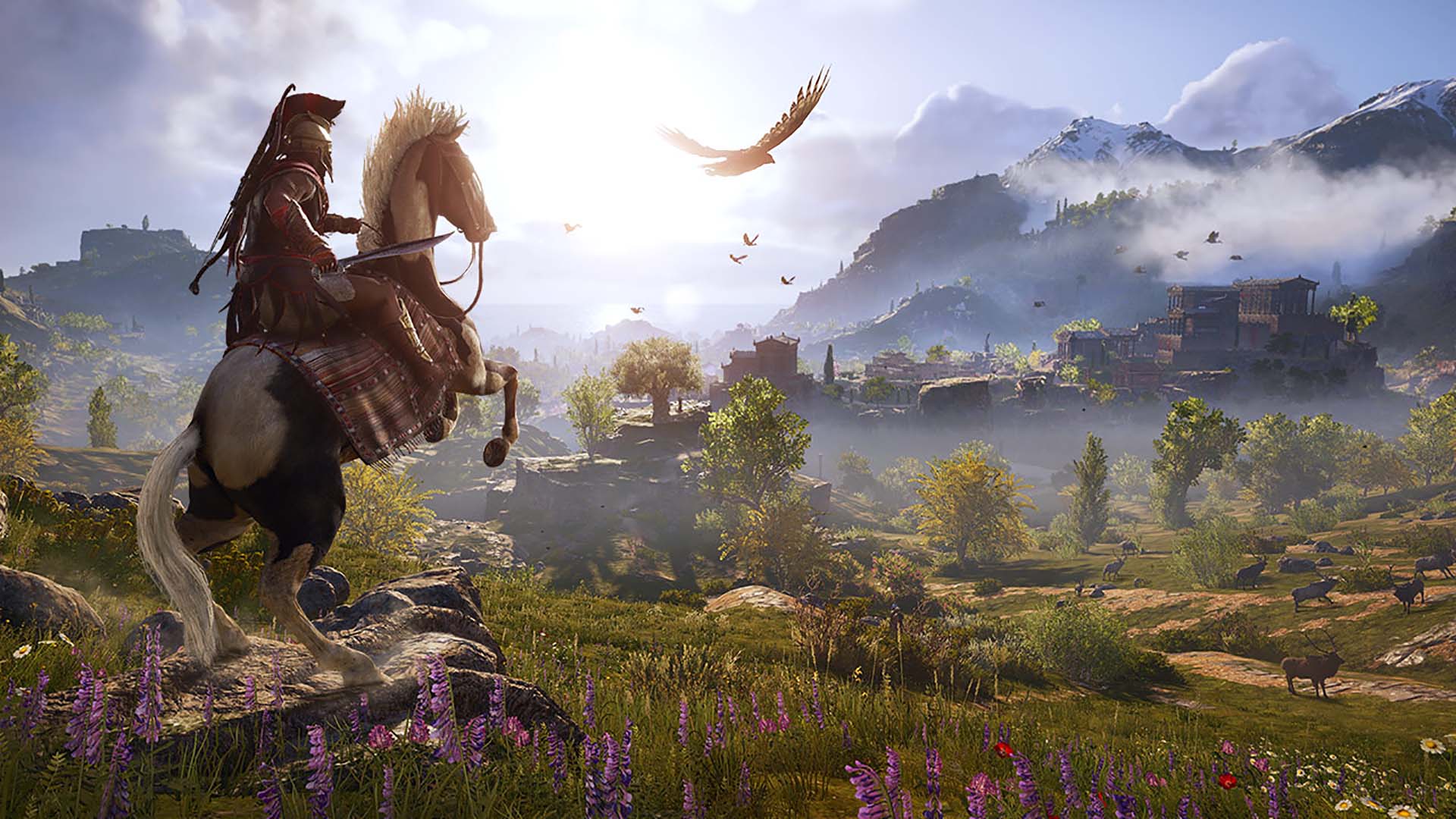 Set over 2,400 years ago before the Peloponnesian war: a decades-long struggle between Athens and Sparta for dominion over the ancient Greek world, we begin our journey in a world in trouble. For the first time ever in Assassin’s Creed Odyssey title you get the choice to play as one of two characters, Alexios or Kassandra both of whom are descendants of the legendary Spartan Leonidas.

After choosing your character, we see a younger version of them fleeing Sparta due to some “difficult circumstances” which leads on to a new life as a glorified mercenary. On the remote island of Kephallonia, we start of completing a bunch of odd jobs that culminate with Kassandra getting pulled back into the conflicts of Greece revealing an underground cult who seek to run the nations politic and thus the main story-line begins.

As ever these ancient events are being viewed by a modern day character, Layla Hassan who some might remember from the previous Origins title. Anyway this time she is using the DNA- reading Animus to see events through the eyes of Kassandra in hopes of finding artifacts belonging to the Isu, an extinct race of powerful precursors who ruled Earth before humanity. As ever with Assassins Creed games we don’t hear much of this part of the story again for a long time. As a result you would almost be forgiven for thinking that Assassin’s Creed Odyssey has no connection to the older games. I found this quite liberating as this is now the most accessible game in the series by which I mean you wouldn’t have had to have played the previous titles to enjoy this game to it’s fullest. 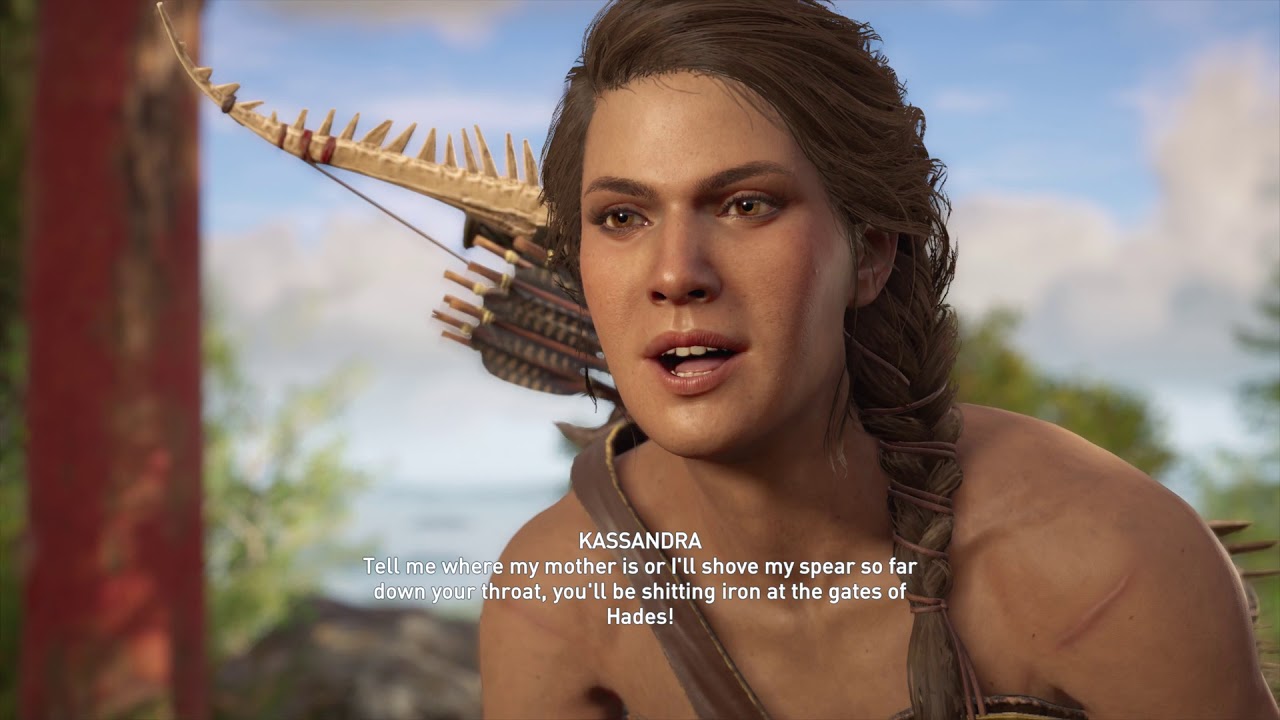 OK, this is cool. Unlike previous games, decisions you make in dialogue and with the in game action has actual consequences in your story. Whether that’s inciting a rebellion, doing the nasty with a few willing civilians or making the decision to save or kill your own father these decisions will change the course of the game and your future interactions throughout.

While most of the decisions you make are based around the vast array of side quests it’s a very interesting feature for a game of this sheer size. 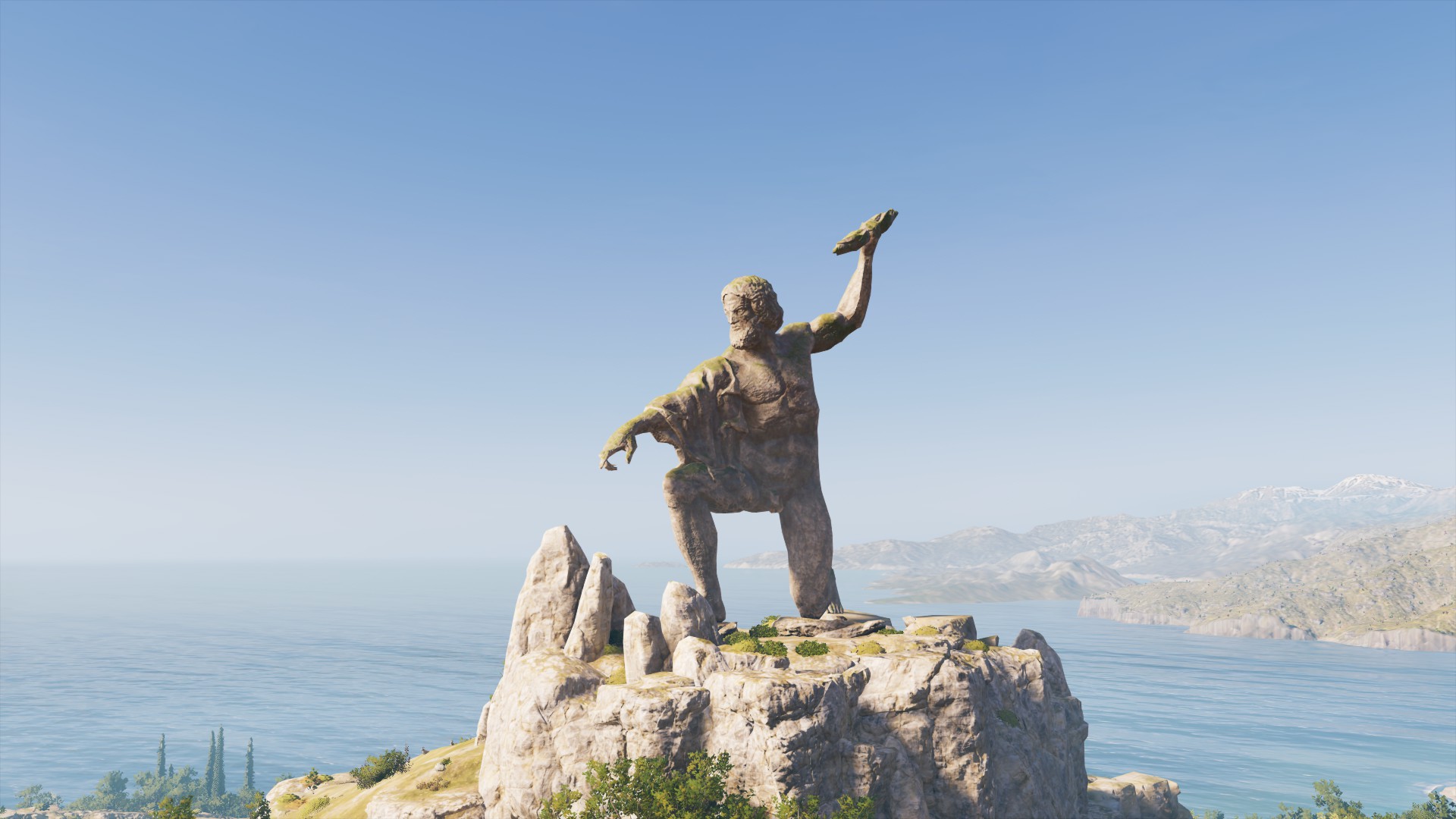 In a world so beautifully crafted you really want to virtually travel the ancient nation and that’s why the new ‘exploration’ the world a lot more immersive. Exploration mode is turned on by default and you will recieve vague directions to objectives so you can head away and find everything by yourself. Speaking to the locals, completing side missions or scouting the world with your eagle, Ikaros, will help you get the information you require to find what you are looking for. Sure you can turn this feature off and have everything layed out for you but where’s the fun in that, right?

If you have the dedication and patience it’s a fun feature that will enable you to see the world how you wish while you go about the game in a manner that suits you best.

Oddly, the main story in Assassin’s Creed Odyssey has received mixed reviews with some calling it disjointed or confusing, but I disagree. True to the Assassin’s Creed narrative, you get to rub shoulders with the biggest names in Greece and while it’s done at a frantic pace I loved the idea of getting up close with legends of lore in the shape of Spartan kings and members of the Athenian society.

Personally they could have improved pacing which would have meant getting more time to get invested in and appreciate the characters. Then again it’s a minor complaint as with the hours of game play available you can forgive Ubisoft for wanting to speed things up a little bit. Even with these pacing problems the main story line is gripping and you will feel invested in your characters journey.

Another aspect of the main story I found interesting was the fact that the leveling system actually comes into play. If you have Kassandra at level 9 and the main mission recommends being level 12 to complete you will get your arse handed to you if you decide to throw caution to the wind and go for it anyway. These level gaps essentially force you to go and complete the side missions to develop your characters skills and weaponry thus increasing playing time and combating the frantic nature of the main story. Well played Ubisoft as many games make side missions optional and while in Odyssey they remain optional, best of luck getting through the main story without them. 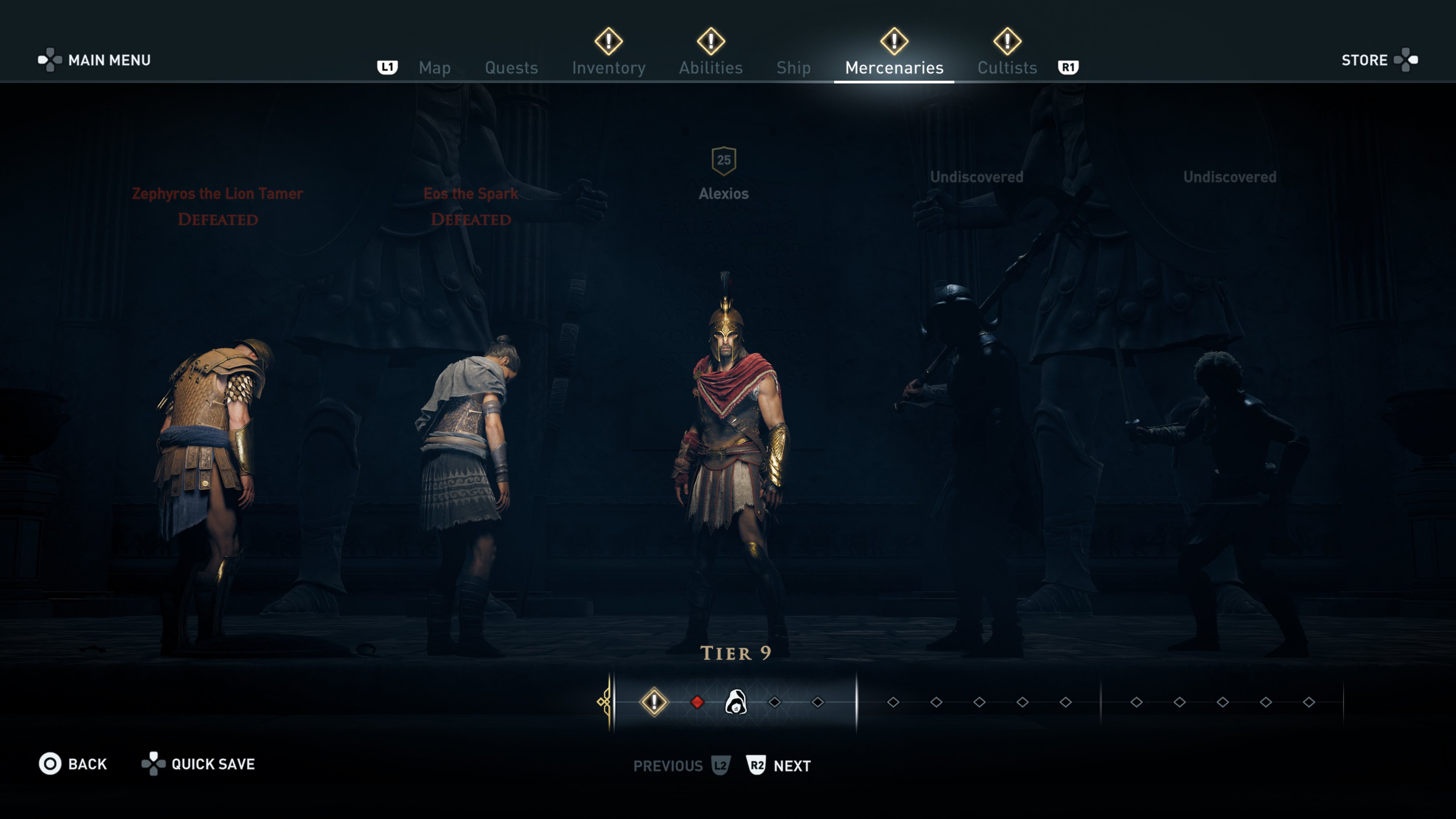 In Origins we saw a mercenary system consisting of 10 incredibly powerful b**tards who wanted to murder you, this time we something a little bit different. In Odyssey what we get is 39 new mercenaries who wander the realm. If you cause too much hassle for the locals your bounty level will increase meaning these hired killers will come looking for you to collect the price on your head.

Oh and going back to the leveling system, each of these mercenaries have a level and fighting one above your pay grade will never end well. Trust me I tried. Literally I went for a wander one evening at level 12 and stumbled upon a level 35 merc. Two simple swiped later and I was toast. It’s kind of like a food chain in a sense, your job is to keep leveling up, remove all other pawns off the table to become the top dog. It’s actually quite similar to Shadows of Mordor in this sense that in order to make the game easier you need to get these guys out of the way but in order to do so you need to keep leveling up and causing trouble which brings them all out of the wood work. A fun added feature which really does bring something extra to the game. Throughout the game Athenian and Spartan armies are at war to gain control. When either faction is in power you are able to totally destabilise their camp by burning supplies and killing captians. Once you have done enough damage to their base camp these Conquest Battles open up. Here you can enlist on either side in return for some high powered gear.

These Conquest Battles are mighty craic, literally hundreds of soldiers take to a field for an all out brawl. It’s a serious last man standing challenge with so many enemies to take down without dying yourself and this task can be made even harder. Remember those mercenaries I mentioned, well the other side can enlist one of these to try and take you down. Sure these can be difficult activities to complete but it’s in these moments where the Assassin’s Creed Odyssey combat system really comes to the fore.

If you have ever played an Assassin’s Creed game then you will know the basic mechanics. What Ubisoft have added here is not unlike the toggle wheel system Spider-man has where you select you abilities and special attacks. This gives you a rake of cool extras to use in combat from the big Spartan boot kick to unleashing a rain of arrows, carpet bombing style on your enemies. As with any game it wouldn’t be fair to just have all your abilities unlocked as a given so unlock more throughout the game by leveling up. Again when in combat use normal attacks to build up your adrenaline, once full you can pick your special attack. Simple fighting mechanics that have been honed over years of game development comes together to create a fun combat control system. It seems like this game more so than anything else in the Assassin’s Creed series, focused on combat over stealth. Good because everyone knows kamikaze fighting is far more entertaining than skulking in the shadows.

Honestly I can’t tell you how many times I used the Spartan kick ability and shouted the obvious – “This is Spartaaaaa!”

In Assassin’s Creed Odyssey we see the Cult of Kosmos, the group who tore Kassandra’s family apart. 44 cultists that you have to hunt across the length and breadth of the games huge map. While this might sound difficult and unnecessary alongside the main story it’s actually a really immersive part of Odyssey. As part of the main storyline you will unmask some of the underground cult but the rest you have to go out and find all by yourself. This is done by completing small side quests, scouting the world for clues and reading stolen letters to figure out each members location. 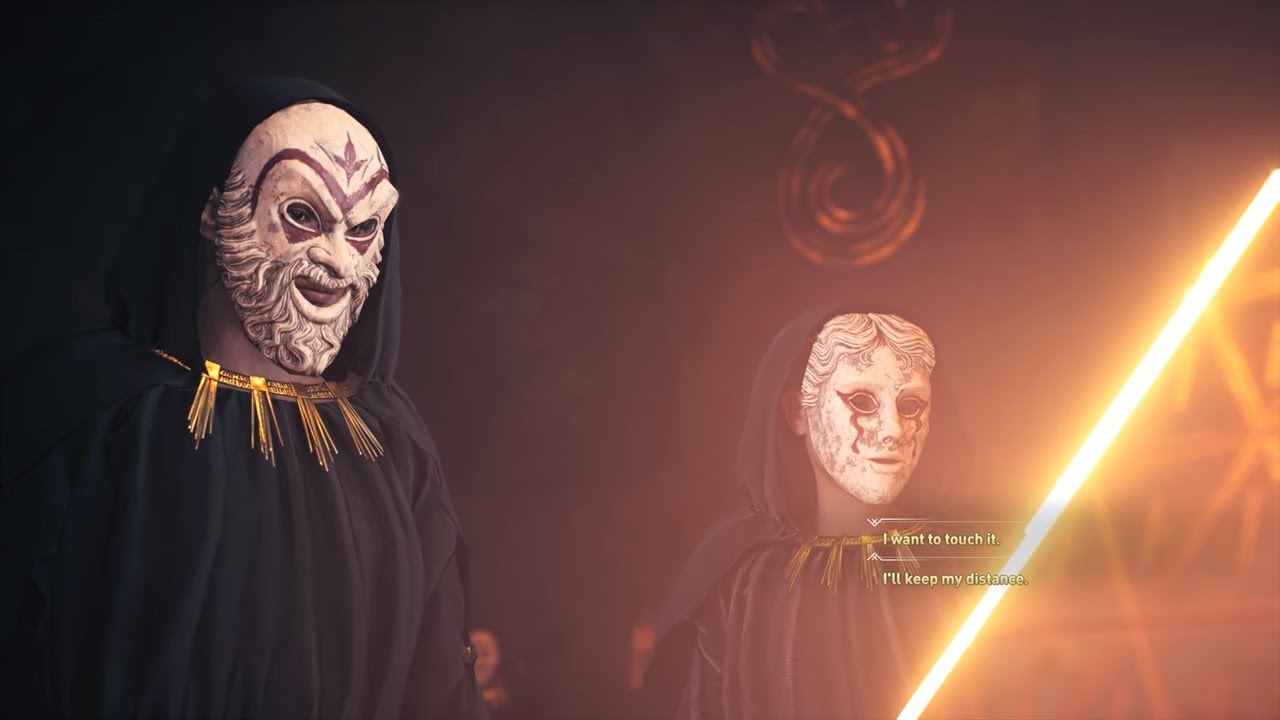 Fans of older Assassin’s Creed games can rejoice as this keeps stealth controls as a big part of the game play. To find one of the cultists you will need to use Ikaros to scout for likely locations while another requires you to destabilize two heavily guarded Athenian island to draw out your target. Stealthy infiltration and sneaking around heavily guarded forts is the order of the day unless you have a death wish.

Sure the main elements are largely unchanged (if it ain’t broke don’t fix it sure) but with the new open dynamic you have more freedom to play the game how you want with your in game decisions having actual consequences. As with any game of this size you will have to bust through some filler content and the occasional glitch, which can be annoying, especially after flying through the uber-slick Spider-man. However this is only a minor complaint, Assassin’s Creed Odyssey is one of the most compelling games I have played this year and it 100% lands in my personal top 5 games for 2018.

If you are a fan of Assassin’s Creed games, get on this right away. If the series isn’t normally your thing but you like the sounds of an epic adventure through Ancient Greece set in glorious detail and a mental amount of content to get through then this is the game for you.