Home News Entertainment News Crash Nitro-Fueled: A Blast from the Past!

There was only ever one karting game that has remotely managed to compete against the legendary Mario Kart series, and that’s Crash Team Racing on the PSOne. Naughty Dog saw what Mario was on Nintendo, followed the formula and bang PlayStation success. It’s one of those games that anyone from the original PlayStation remembers fondly and after the success of their remastered N-Sane trilogy it made sense for Crash Nitro-Fueled to make its PS4 debut.

Crash Nito Fueled gives the older racer a new paint job with a couple of new tricks. Other than that, there is nothing groundbreaking here and if you’re a fan of the genre you know just what to expect since it’s almost exactly the same game. Power-slides, power-ups, slick tracks and frustrating boss missions, Nitro Kart is essentially a juiced-up remake of the original rather than a brand new game but it’s as enjoyable as it was 1999.

Simple enough, it’s exactly like the original. The Adventure Mode hits 17 different tracks across 5 worlds. You race against 7 other drivers or 1-v-1 against the bosses and once you’ve done all that then the graft begins. Relic and CTR races must also be completed on each track to hit the 100% completion. Relic races can be won by shaving race times down to the bare minimums with fast racing and hitting boxes that temporarily stop the clock. While the CTR races are completed by finding the letters C T and R during a race.
Of course, there was always going to be the power-ups. Missiles, TnT’s, clock stoppers and the dreaded blue ball are all back. Crash through the boxes. hit O and watch the chaos ensure. There’s not really a whole lot to say here if you remember the original then Crash Nitro-Fueled will feel the same now as it did then.

Another thing that hasn’t changed is the pacing of the game. It’s all about timing though powerslides to perfection to earn boosts. You can link them together into combos to maintain maximum speed. It’s a skill you will need to learn to learn your opponents in the dust.

Sadly the AI is very limited, It’s set up to maintain a certain speed no matter what you do. That means there’s nothing to tell the game to up the competition speed to give you a real race, you can literally burn away and not have a single challenge throughout. Grand if you’re in the mood for a handy win but if you actually want a real challenge, keep looking.
In a way that’s the only flaw, at times you feel you and the other racers are playing very different games. I personally would have enjoyed it if the computer could hit the same speeds and if they see you breaking off for a short cut they will also start to use it rather than sticking to the track and letting you breeze by them.The single-player game boils down to a constant quest to get faster and faster, honing your skills to a fine point. It would have been great if the computer players ramped up their skills as well and gave a good fight, but once I surpassed their abilities it was a battle against myself. 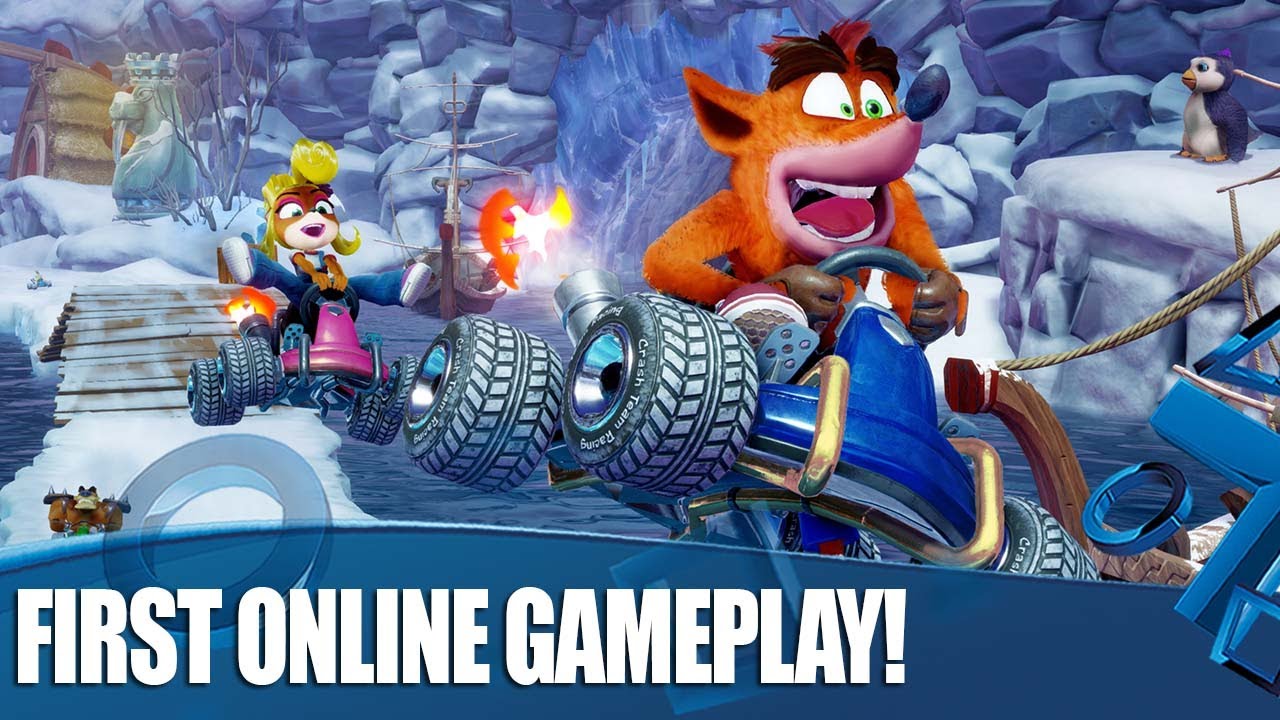 Campaigns over and that’s it, right? Wrong. Crash Nitro-Fueled has multiplayer and a new online game mode to let you test yourself against your friends and random strangers. For the best visual experience stick to one-on-one races, the graphics are just popping but try a 4-player tournament and the graphics engine simply can’t keep up and you lose a lot of detail. Not really a major issue to be fair.
There are 5 different battle modes in multiplayer from standard races to the last man standing free for all and even capture the flag. Which is great fun might I add. Instead of racing, we got to blow each other up.

The graphics are brilliant. In an era where so many games are trying to become as realistic as humanly possible, there is something brilliantly enjoyable about a vivid cartoony world.

As the facelift was the only real difference between Crash Nitro-Fueled and Team Racing, it had to be done well. It is, just see for yourself:

My only issue with the graphics come in multiplayer games. With 4 players in the game, the graphics start to kind of chug along, two players is fine but if you play a 4 player tournament, you will just end up with a headache….trust me. Maybe I’m being picky but I feel like they could have pushed the boat out a bit more when it came to power-ups. Back in the day, they did the best they could with what they had but maybe they missed a trick not adding in some effects, something like the screen warping during a speed boost. As it stands, most of the special effects are just repainted entities but they could have added so much more chaos than` this mad cartoon world deserves.

I always remembered the mad music on Crash being reminiscent of Wacky Racers full of Looney Tunesesque sound effects. Who else remembers Wacky Racers?

It’s clear the game was always targeted towards a younger audience and each of the characters gets their own cutesy little phrases they say when the hit you with a rocket or zoom by you on the track. While in some games this can get annoying after awhile here you just zone out to the track music as you’re brought back to Saturday mornings on the couch. It all just works along with the action nicely.

Crash Nitro-Fueled is a solid remake of the PSOne Classic. It’s fast, fun and the online team mode is a nice addition The only downside is obvious, it’s a remake. From Mario Kart to the Crash series this type of game has been made a million other times and this title doesn’t bring much new to the genre. Even if I personally would consider the online gameplay a win.

If you loved the original, or consider yourself a fan of kart titles, this will provide the enjoyment you need for some nice light gaming, plus the alternative game modes help give CNK some good bang for the buck. Overall it’s a wonderful game that I personally would highly recommend for old school fans and younger gamers. Fingers crossed this leads to a fresh title in the near future.