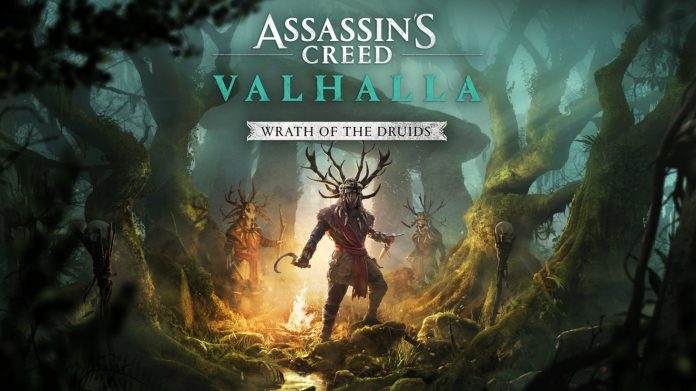 Our moment in the video game spotlight has finally arrived! Well, I say finally arrived; it’s been about three weeks now. Wrath of the Druids, the first of two downloadable expansions for Assassin’s Creed Valhalla is here and with it, an excuse for the franchise to come to our fair Isle. Don’t get me wrong, this isn’t the first time a major video game has been set in Ireland (I feel like Gaelic Games Football for the PS2 takes that honour). It is, however, the first time a Triple-A, open-world game of this caliber has dipped its toe in our waters. And I love it.

First things first. If you have bought the expansion but are worried about where it fits in with the timeline of the main game, don’t be. The Irish storyline and setting are totally separate from the rest of the game so you can play it at any time you like. Having said that, there are a lot of crafting materials and pieces of endgame loot here so don’t jump in if you’re at all worried about making the game too easy for yourself. Other than that, the characters you meet and the feats you accomplish won’t change anything back in England so play at your leisure.

What’s the Craic with the Gameplay?

As you’d expect for Downloadable Content, the gameplay is basically the same here as it is in the base game. You’ll be sneaking, raiding, pillaging, and killing just the same as before. There are some lovely new additions to the gameplay loop though, and they feel awfully reminiscent of the Assassin’s Creed games of old. Dotted throughout Ireland there are seven ring forts that act as trading posts that will allow you to stockpile a variety of goods. These goods (clothes, jewels, ale, and books) can be traded in Dublin for weapon runes and some pretty sweet armour sets (the Egyptian and Iberian sets are two personal favourites). However, in order to bring these ringforts under your control, you have to first collect the deed from nearby cultists which allows you to add extra buildings and features to increase your income (similar to Monteriggioni in AC2). This will then enable you to go on missions to win the favour of local Irish lords. These quests all have optional objectives and can be obtained by visiting pigeon coops (again, serious Ezio trilogy vibes here). While 6 of these missions are required for the main story, they are totally optional, but they do reward you with hefty amounts of supplies if you complete all the objectives they offer. For the ultimate callback to the classic games (can they be called that now?) you collect these missions from pigeon coops found across the map.

Some of the original activities from the base game have been given a fresh lick of paint as well. The cairns are back, for one. Don’t worry, they’ve been made way easier than the later ones in England. I think Ubisoft took a hint with that one. The Fly Agaric trials have been replaced with the Trials of the Morrígan (an ancient Irish war goddess) in which you’ll face off against the toughest enemies the game has offered to date. If you enjoyed the minute-to-minute gameplay of the base game you’re in for a treat here. There’s just more of the fun with less of the faff!

The story is very typical of Assassin’s Creed as well. Eivor is summoned to Ireland by her cousin Bárid mac Ímair, the real historical King of Dublin, to help him secure the approval of the new high king Flann Sinna. All is going well until it is revealed a group of druidic cultists (don’t worry, Ubisoft knows that there were no druids in Ireland in the 9th century, it’s just a flight of fancy) called the Children of Danú have plans to take control of the land. Naturally, it’s up to Eivor and her newfound allies to rid the land of this menace once and for all. As you’d expect, this all ties in with the series’ favourite hand-wavy sometimes-goodies-sometimes-baddies, the First Civilisation in one way or another and it offers some great storylines. There’s even one where you have to go and save the Book of Kells (at this stage only a couple of decades-old) from the cult.

“And they became as Irish as the Irish themselves…”

The characters themselves are great as well, for the most part. There are two characters who were clearly not voiced by Irish voice talent (seriously, their accents are painful. What were you thinking, Ubisoft?). But the rest of the cast is either Irish-born and bred or they’re doing a damn fine job of putting it on! Flann Sinna really gives the impression of an auld lad who’s seen too much in his lifetime to be phased by anything, while the other petty kings are all reminiscent of that one group of lads down your local who can never agree on anything but at the same time, know everything.

The writing is top-notch Irish as well (as opposed to Oirish a la Shay from Assassin’s Creed Rogue). Many a sentence is punctuated with an “Ara” or two, “Feck”s are all over the place, and the odd cúpla focail are thrown in for good measure. In fact, most of the random encounters with the Children of Danú take place entirely as Gaeilge. It’s clear that a lot of work and research went into the daily life of the Irish people and it’s very much appreciated. Even from a design standpoint it really hammers home that this a completely foreign land for the Norse raiders despite having settled here for a hundred years.

Overall I really cannot recommend this DLC enough to anyone who is a fan of the series. I feel like it’ll only become even more fun to explore when Valhalla gets its own Discovery Mode (a game mode designed purely for exploration and learning about the setting). Admittedly the €25 price tag may be a bit steep for some, but if you go for the season pass that’ll set you back €40 and it includes the reportedly bigger Siege of Paris expansion as well. Definitely check it out if you get the chance!