Schrödinger’s Glass. When you drop your mobile phone and it lands butter side down, your screen is both perfect and shattered until you look at it. To reduce the risk of a smashed screen, many of us will choose to grab a screen protector. Tempered glass screen protectors have become really popular in recent years. I was really excited to try out Whitestone Dome after seeing Unbox Therapy review their wares. Installation promised to be bubble free and requires a blue light to seal the screen protector and glue to the phone. It’s a serious setup, but is it worth nearly €50 price tag (before delivery costs are added)?

Why Use Tempered Glass Screen Protectors?

I’m a massive believer in the power of Gorilla Glass. Gorilla Glass is a particularly strong form of glass used by many smartphone manufacturers. The reason is simple; it’s bloody strong stuff. If your phone has Gorilla Glass, it’s much less likely to have a broken screen or even a scratched screen. If you have Gorilla Glass, I’d argue that your requirement for a glass screen protector is greatly reduced; but never removed.

Typically, the best smartphones on the market have this Gorilla Glass, but believe it or not, the Huawei P30 Pro does not. I was pretty shocked to hear this, but in hindsight, it adds up. A friend of mine has been lamenting a scratch on the screen of his new P30 Pro for the past few weeks. I apparently dodged that bullet until a Whitestone Dome tempered glass screen protector landed on my desk.

What Is Whitestone Dome?

Whitestone Dome has pretty much just roared onto the scene. I say roared because in the past few months they’ve been featured and loved by Unbox Therapy which means everyone recognises your brand.

Ok, after watching that, it’s quite obviously a paid advertisement. Lewis isn’t even hosting this video on his own channel anymore from what I can see so let’s take all of that with a pinch of salt.

The video does still lay out the basics. Whitestone Dome is a tempered glass screen protector. It comes with an impressive installation rig which allows you to apply the protector to your phone with a sealant goo before completing the process by using a UV lamp. Very high-tech looking and very cool. 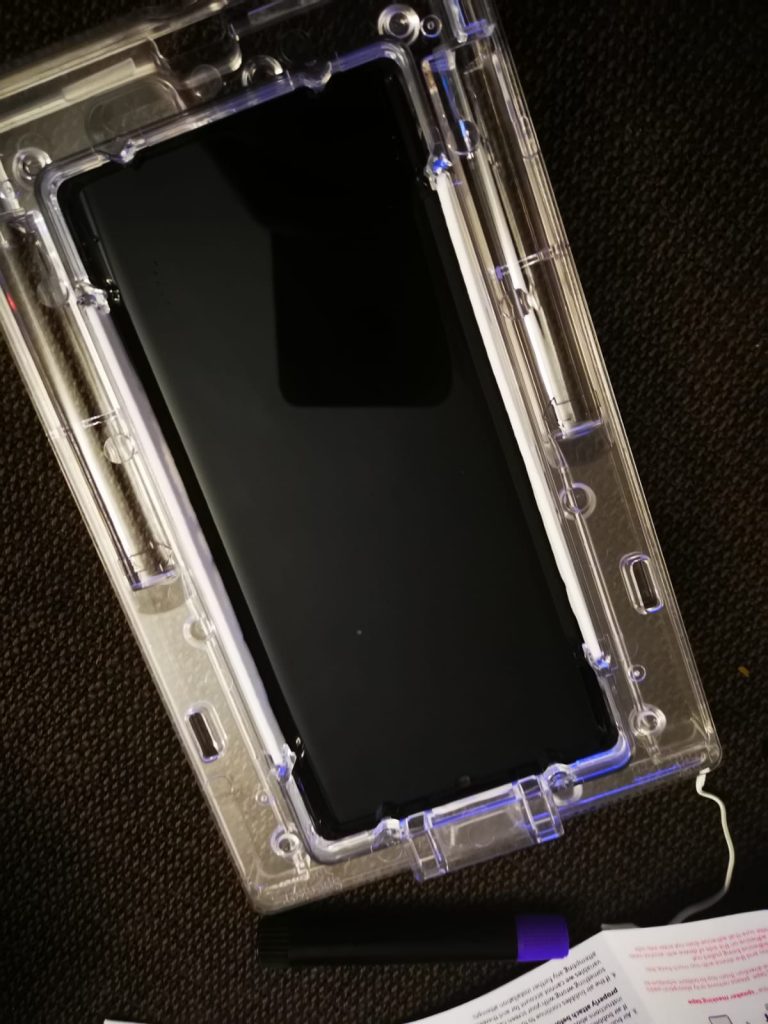 Whitestone Dome didn’t pay me to do a review, but they did send me a screen protector to test out. Here’s what I thought of it.

First of all, the process isn’t super simple. I’d actually say it’s a little intimidating. Whitestone Dome does offer a load of videos online which will help you get started with fitting one of these screen protectors. Here’s an example:

Unfortunately, there was no instruction video for the P30 Pro, so I followed this video. All the steps were more or less the same for both phones, so no problems here.

Once you get over the intimidating look of the whole setup, the installation is actually pretty straight forward. Pop the phone into the rig, follow the instructions really closely and most importantly, make sure your screen is immaculately clean. I used to fit screen protectors as part of my day job, so I spent a lot of time on this bit knowing one stray spec of dust could ruin the whole process. There are even some sticky pads in the pack which you can use to dab and grab specs of dust from your screen. They’ve thought of everything.

Once you drop the liquid sealant stuff onto the screen, it’s game time. Tilt the rig as per instructions and drop the screen protector.

Next up is the UV light. 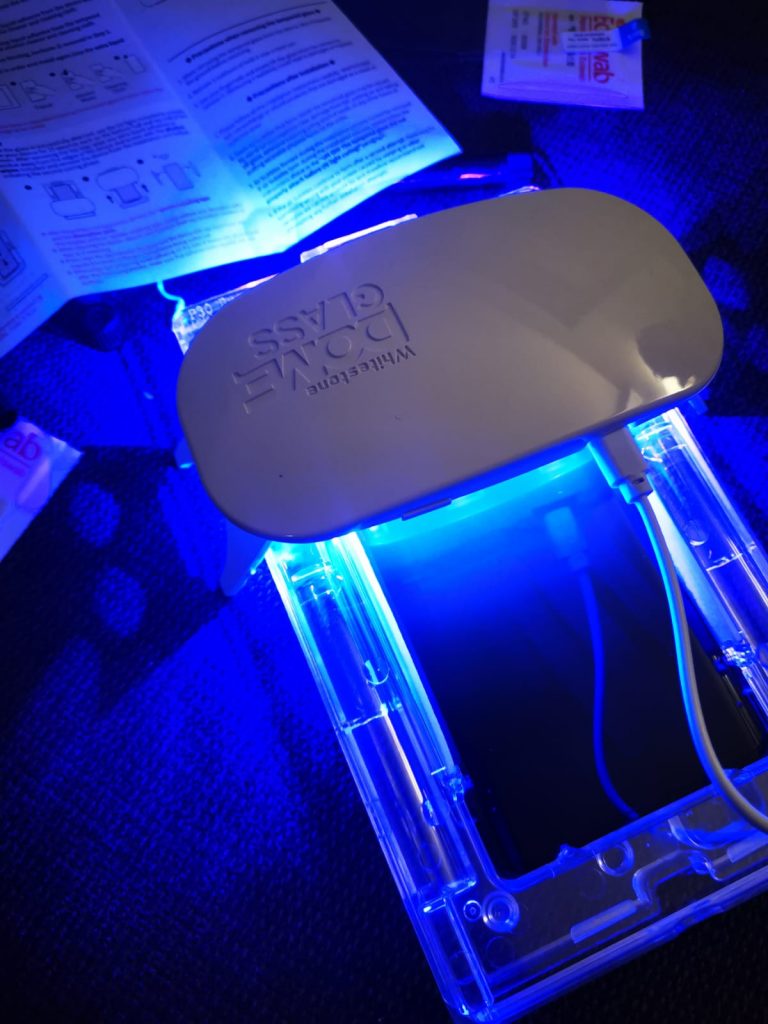 Using the UV lights to move up and down the phone, the rays will bond the screen to the phone.

Shortly after I installed the screen I sat back to relax. Then I noticed an air bubble.

Now, let’s be realistic here. When the screen is off, you can spot the air bubble under the screen protector. But when there’s something on the screen, it’s barely noticeable. I know it’s there but nearly never see it.

More annoyingly, there are some weird streaks which have appeared along the edge of the phone’s screen. Again, the light needs to hit the screen a certain way for me to notice these, but it was disappointing to see all the same. Now there are some extra factors to consider.

As I said, I used to fit these things on a regular basis. I’m not saying I’m the world’s best screen protector fitter, but I have experience and it still went wrong. I can only imagine what could happy to people doing this for the first time. Then there’s the price tag. €50 is a lot of moola for something that could result in less than satisfactory results.

A broken screen can ruin your experience when using a mobile phone. Hell, even a scratch can be enough to make you feel like your brand new phone is five years old. I was shocked when I saw the P30 Pro doesn’t use Gorilla Glass and was delighted to be able to add an extra layer of protection. Unfortunately, the Whitestone Dome screen protector, despite quite the epic installation process, ended up with air bubbles. While not distracting, it’s a little disappointing from something that costs €50.

At the same time, broken screens are even more annoying. I guess my verdict here is to always consider getting a screen protector, but keep an eye on the price. I feel the Whitestone Dome installation process is a little bit more gimmick than function.

There is one positive that I’ll end on. It’s pretty cool that the fingerprint sensor still works with this screen protector. It makes sense given this feature on the P30 Pro is driven by light, but it also works on the Ultrasonic sensor of the S10 and S10+.

I do recommend buying a tempered glass screen protector and who knows, maybe you can pick up one of this on sale and it might be worth it.