Home Gadgets Audio Spotify’s Car Thing Is Free For Now But Not Coming To Ireland... 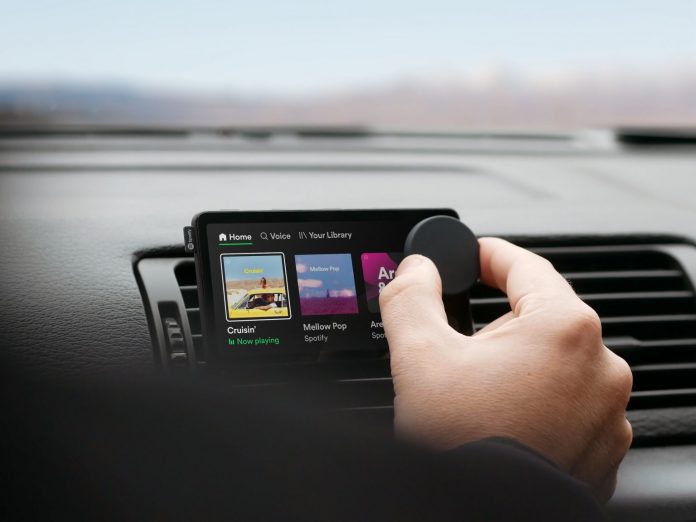 Spotify enjoyed the lions-share of the music streaming market for many years. Most recent data shows that they sit in second place to Apple Music. It’s not a bad place to be for the platform, but how do they continue to grow and make more money without losing subscribers. Well, they take a leaf out of Apple’s book. Apple, a hardware company, is making money by moving into software, or services. Spotify, a service, is moving into hardware with the Car Thing. It’s actually free, but unfortunately, not available in Ireland.

What Is Spotify Car Thing?

The idea of the Spotify Car Thing has actually been around for a few years. The original gadget was designed to be a voice-controlled in-car music control, much like the latest iteration is. The difference is that the original was to learn from users. This new Car Thing is very much shifting focus towards generating revenue from hardware units.

Car Thing lets you play music from your Spotify Premium account while driving without the need to take out your phone. Not everyone has Android Auto or Apple Car Play or even a young enough car for such technology, making a retrofit gadget like this a very popular idea. To play some tunes, you just have to say “Hey Spotify” followed by the track or playlist you’re after. You’ll then be able to control what’s on your Car Thing with your voice or the physical dial on the front, along with the generously sized touchscreen.

Yep. The weird thing is that the Car Thing is free. Spotify is looking to make money by giving away free hardware. You’ll need to fork out for delivery, but the device itself won’t cost you a penny. It’s exclusively available for Spotify Premium customers and can only be requested. You’re not at all guaranteed to get it. See that. FOMO, just like what Sony is doing with PlayStation 5 right now.

Spotify themselves say their “focus remains on becoming the world’s number one audio platform—not on creating hardware” but this is a clever move. There is a massive surge in interest from customers who want a better in-car audio experience. The likelihood is that Car Thing is going to drive new customers to abandon Apple Music or other streaming platforms, jumping ship for Spotify and some neat hardware delivering a “seamless and personalised in-car listening experience”.

All of those new customers are not only bringing new revenue but because of the hardware commitment, they’ll be unlikely to leave the platform either. Genius.

Yes. To work, Spotify’s Car Thing needs a WiFi or data connection. The latter being the more likely for when your out and about in your car. It doesn’t have to many smarts inside it either and will need to retain a connection to a smartphone too.

Is Car Thing Coming To Ireland?

No. Spotify has not provided any information on further plans to provide or sell the Car Thing outside the United States. For now, the Car Thing will only be available in the U.S. and is available on an invite-only basis.

If you’re in the United States and like the sound of this, you can sign up for Car Thing with Spotify. Best of luck with requesting your invite!