Sony, they just like to be different, don’t they? Over the years they have intentionally gone left when others went right. We forget Sony was the first Android phone maker to push waterproof, side-placed fingerprint sensors and all-glass designs so it should come as no surprise that they are completely reinventing it’s Xperia lineup again.

This year Sony has swapped the Xperia XA range out for new Xperia 10 and 10 Plus. This new model just doesn’t boast a new name, it brings a new shape with an elongated 21:9 aspect ratio. But is that enough for the Sony Xperia 10 to stand out as the best mid-ranger on the market? Let’s have a look. The Xperia 10 is a really sharp looking bit of kit. As ever, I find with Sony they really know their style. Boasting a metal unibody it offers solid quality, the curved corners and edges make the phone feel really slick considering its €300 pricing.

Straight out of the box, you will notice how tall the Xperia 10 is, the narrow, slender frame and tall body makes for a form factor that is certainly different from the competition. Sure the 21:9 display won’t be for everyone but it’s perfect for movies, exactly what Sony wanted. At this years CES, it was clear Sony is targeting the entertainment industry with releases of their new 8K TV and 360° audio systems. So it shouldn’t be a surprise their mobiles followed suit. This new shape and aspect ratio means that if you’re watching a movie on your mobile, you will never have the black banners above or below the movie.

Moving onto the rear it’s typically Sony, a raised dual camera housed in a metal surround stands out from the main body. On the front, it’s pretty much all screen apart from the speaker and front camera at the top. Again, I have to say the phone looks and feels a lot more premium than the €300 price suggests.

The display is the main selling point on the Xperia range this year, the Xperia 10 contains a 6-inch display, which is 0.5-inches smaller than the Xperia 1 and the Xperia 10 Plus. So it’s a good size and it opts for a full HD+ resolution which means you get a good crisp display.

Why this new longer look? This 21:9 aspect is new to smartphones, though not new in general. It’s the same ratio used for cinema content and Sony claim they film 70% of their content in this ratio. Theoretically, it means watching movies and stuff on the Xperia 10 should be more immersive.

Compatible content looks brilliant. Colours look great and the picture fills the space beautifully. Impressive stuff in my opinion. There is one problem, not a lot of content is filmed in this ratio. Netflix Originals are normally filmed in 16:9, or 18:9 which means those black bars they are trying to avoid still show and a lot of apps aren’t in this format so things can look squeezed, thus defeating the object of the phone’s USP. As with any phone of the market now, the camera is one of the phones major USP’s. The Xperia 10 comes a dual camera on the back. At 13mp and 5mp, the rear cameras showcase similar features to it’s bigger brother the Xperia 10 Plus, including bokeh images and 4K video recording, but it misses out on optical zoom.

The camera itself performs well in good light, very well indeed. Anything shot in a good light offers strong colours and balance. Pictures are crisp and not overly processed, the bokeh and portrait modes are solid performers so all in all, I’m happy. Sadly in low light, it all falls apart. This is when the phone starts to show it’s pricing. Sure the pictures are useable but they display a grainy quality and are fairly noisy. Maybe I’m just being picky but the lack of image stabilization showed. You can also shoot images and video in the new 21:9 ratio and they look brilliant of the screen, this is really cool and again shows a willingness from Sony to try to push the boundaries.

At the front, we have the 8mp ‘selfie’ camera that is capable of taking those pro-effect bokeh style photos. It’s solid, not industry leading but solid. Again in regular lighting, the shots can be quite impressive but the performance falls apart in low light.

Rocking a 2870mAh battery, it’s no surprise the Xperia 10’s battery life is distinctly middle of the road. I would unplug normally about 7:30 most mornings but I would usually be rushing to a charger by 8ish. My regular use consists of all the usuals…checking emails, Sky Sports News, social media, a bit of Spotify and the usual calls and text, nothing too out of the ordinary.

The Xperia 10 supports fast charging, which makes topping it up fairly easily, but I’d normally expect a phone to last at least the full day. It’s not bad by any means but it’s middling at best. Look Sony has concentrated on style and a crisp display at this price point – we can’t have it all.

The Sony Xperia 10 comes with the Qualcomm Snapdragon 630 platform and 3GB of RAM, a slight downgrade from the Xperia 10 Plus. The storage space is adequate with 64GB of memory- and there is microSD support for storage expansion up to 512GB.

Overall I found the performance to be quite good and the day to day performance was reasonable for the pricing. It also offers some software to help the battery last that little bit longer, including Stamina mode but with the fast charging capability, a quick boost is no big deal.

When it comes to the audio side of things, the Xperia 10 not only has the now retro 3.5mm headphone jack but it also supports Hi-Res audio, it would have been amazing to get the Sony Dynamic Vibration system because I think it would have added another dimension to the movie watching experience. But again that’s just me being picky, overall for €300 it packs a punch for the price. 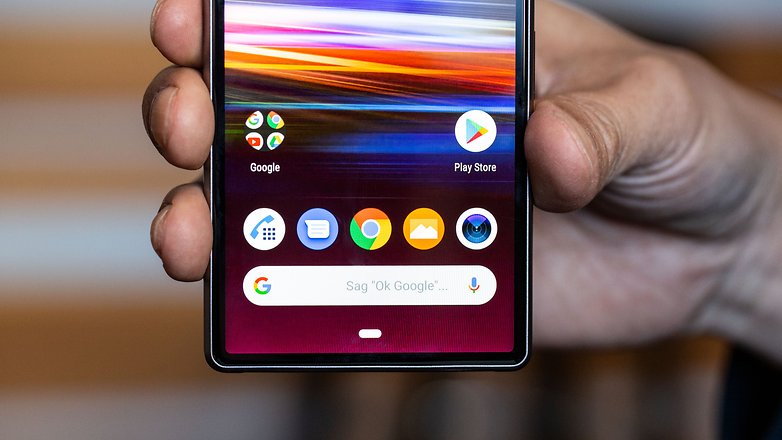 The Xperia 10 runs Android Pie, with some Sony bloatware thrown in. Over the last few years, Sony has massively reduced its interference with operations, offering a much more refined experience.

Some of these additional software touches from Sony are really clever to be fair. To make use of the new 21:9 aspect ratio display, they have released a new feature call the Multi-Window user interface. This allows users to easily run two apps simultaneously – one at the top of the display and one at the bottom. A nice feature to have, especially for me watching the last day of the EPL while tracking the other results on Live Score.

Since the XZ3, Sony has given us SideSense a feature that allows for easier access to frequent apps and better one-handed operation. It uses AI to show you the apps you use most at specific times and gives you easy access without having to swipe up from the bottom of the display for app access.

Aside from those enhancements, you get a pretty standard Android experience. It’s a good, clean experience with gestures at the button and Google Assistant on board, as you would expect.

Credit where it’s due, the Sony Xperia 10 gives you a lot of phone for about €300. The build quality is good, the new 6″ 21:9 screen is ideal for movies and it’s generally a decent runner.

On the flip side, the battery isn’t brilliant and we get some of the usual performance blips we have become used to from the Sony mid-range over the last few years. However, at the same price point, there is also the Samsung A50 and the Huawei P30 Lite. The competition is fierce.

The Xperia 10 could have been one of the best mid-range phones around, but underpowered hardware stops it from delivering on its opening promise. It won’t steer you wrong if you want something stylish and you like watching tv and movies on your phone, then this could be the one for you.