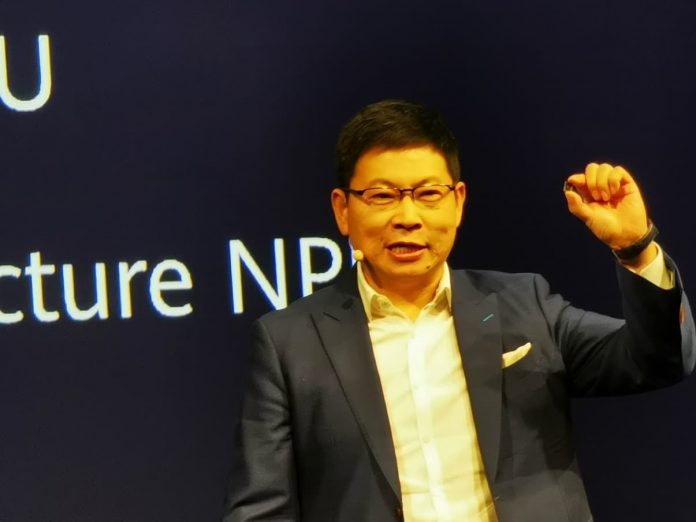 Huawei was busy at IFA Berlin this year. Straight up,  the Huawei FreeBuds was the most interesting consumer announcement from Huawei at IFA 2019. However, the long term win for consumers is going to be what chip improvements let them do with their phones. Huawei also announced the Kirin 990 chip which will feature in the Mate 30 series launching in Munich later this month on 19 September.

The chip itself was hardly a massive surprise given that a gigantic banner has been sitting in the foyer of the Messe Berlin conference centre showing the Kirin 990 itself.

Expected today is new P30 Pro colours and the Kirin 990 chip. Both on a banner at IFA the past few days at #IFA19 so expect some surprises too. Watch GT 2 probably waiting till Munich along with the #Mate30 Series. pic.twitter.com/0IZLoWhOvI

Even as a tech reviewer, sometimes chip launches are a little underwhelming. The Kirin 990, however, would appear to be delivering some exceptional power into your hands.

There’s lots of functionality that this chip delivers that I won’t bore you with, but if you’re in to shooting video, the Huawei Mate 30 powered by the Kirin 990 would appear to be pulling out all the stops. In fact, movie making has become a bit of a trend in the mobile phone world. We’ve teamed up with the Dublin Smartphone Film Festival for the past few years and have been blown away by the quality on an annual basis. Sony is also focusing on this space with their Xperia 1 and Xperia 5 which boast the incredible Cinema Pro app, simulating qualities normally found in cameras used in Hollywood.

In the demo delivered at IFA 2019, Huawei showed off the Kirin 990’s processing power by taking a single video clip and showing how it could be editing using only the phone. Green screening is a technique you likely know best from watching the weather. When Martin King is delivering the birthday wishes to Bridey down in Cork, he’s actually standing in front of a green screen, with the maps and charts added in later.

The Kirin 990 delivers a plethora of over benefits to phone users. With great power comes great artificial intelligence which not only delivers cool video processing but helps manage your battery usage more efficiently too. It’s also the most efficient 5G chip on the market

Strangely enough, I predicted that mesh systems would be one of the big things to keep an eye out for at IFA 2019. Sure enough, as I walked the halls of Europe’s biggest trade technology show, there were plenty of mesh solutions to hand. In case your not familiar with WiFi mesh systems, they are probably the one gadget nearly every Irish home needs but doesn’t know about.

Mesh systems allow you to connect several boxes to your home WiFi and extend the signal. If you have a room which is too far from your router, you can connect as many mesh boxes as needed to improve signal and eliminate WiFi blackspots in your home.

Now, I’ve gone off on a bit of a tanget there because Huawei didn’t exactly launch a mesh system today. Huawei launched the WiFi Q2 Pro which is, in fact, a powerline system. The difference with these systems is subtle but important. Mesh is usually achieved via WiFi connections, but powerline systems use the cables in your home to pass broadband from one area to another. You plug one powerline into the wall beside your modem, and another elsewhere in the house and Bob’s your uncle. Internet will magically appear in that area, using the same WiFi name and credentials. At least if you’re using Huawei’s latest tech.

This is key, because the system allows for seaming transitioning between powerline boxes. You won’t notice any differece yourself, except for the fact you’ve got WiFi in that old black spot of yours.

I’m not going to dwell on this for too long, because like the AI cube launched at IFA last year, as cool as this is, we may not get to see this in Ireland.

Speaking of things were unlikely to see in Ireland. Huawei also announced two new colours for the impressive P30 Pro. The designs are gorgeous and they even let the Huawei CEO take a great pop at Samsung for their Galaxy Note 10 designs following that of the P30 Pro. It’s unlikely these colours will hit the Irish market, but if you’re really interested, you should be able to pick up a SIM-free version of the P30 Pro on Amazon.co.uk in the colour of your choice when available.

Finally, as part of the P30 Pro refresh, Huawei also showed off the latest features of EMUI 10 which comes to the P30 Series later this month. It’s still up in the air as to whether or not Android 10 will be available on the Mate 30 Series next month and indeed whether or not we’ll get Google apps. While my gut says this will all blow over by then, we’ll just have to wait and see what happens in Munich later this month.