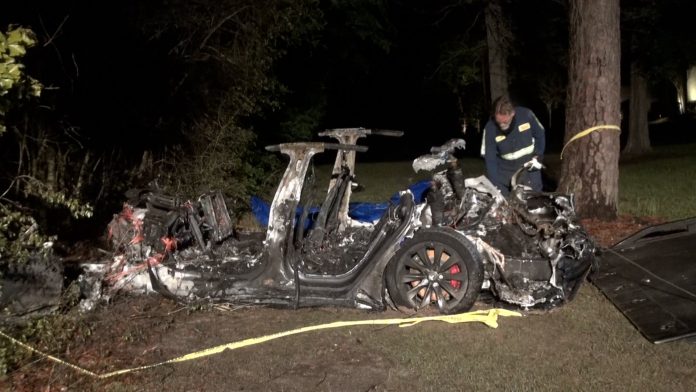 Two men have been killed in a car crash over in the United States. We wouldn’t normally report on things like this but the crash involved what looks like Tesla Model S. It’s hard to tell from what’s left of the car following a massive fire. Unfortunately, the crash seems to have occurred because there were only passengers in the car and no driver, leaving many wondering if Tesla should be allowed to continue calling their driver-assist feature “Autopilot“.

What Is Tesla Autopilot?

A couple of years ago I took a Tesla Model S out for a spin along the M50. I activated Tesla’s driver-assist functionality which they’ve branded “Autopilot”. It didn’t work great, with the system being confused over road-markings coming up to an exit, so I immediately disabled it after a few seconds, feeling a little uncomfortable with the idea.

I’ve since tested out a few systems on cars designed to keep drivers safe. Some of them keep cars in the lanes, control cruise control based on cars around you, or if there’s an obvious collision imminent. Tesla’s onboard systems are more advanced than most cars, but the question now is whether or no the term “Autopilot” is misleading to the point where it’s likely to cause an accident. Today’s news would suggest the answer is that the term shouldn’t be used.

Reports are emerging of a crash in Texas involving a Tesla and the unfortunate loss of two lives. Normally, this would involve a driver and passengers, but this crash seemingly only involved passengers and the Tesla “Autopilot” system. The Tesla crashed into a tree with one person sitting in the passenger seat and another passenger sitting in the rear of the car.

It appears that the two passengers engaged the “Autopilot” functionality but did not remain in control of the vehicle. The car didn’t recognise an upcoming corner and drove off the road into a tree. The Tesla website describes the feature as an “advanced driver assistance system that enhances safety and convenience behind the wheel”.

In this accident, it does look like the passengers believed the car could driver itself, whether that was a responsible thing to do or not.

Not The First Time Autopilot Is Misunderstood

The name itself suggests that the car drives itself. There is a massive difference between automated driverless cars and what Tesla offers. Yet, this misunderstanding has occurred before. Many drivers have been videoed sleeping behind the wheel of their Tesla while the car does all the driving. This is just one of the countless videos.

In other cases, people have “tricked” the Tesla safety features requiring a hand on the wheel so they get free reign of their car while the assistance system does the driving. This video claims it “was done by professionals on a closed-circuit course”, likely in an effort to not only trick the Tesla, but YouTube’s dangerous activity filters to chase some social clout online.

Clearly, there’s a knowledge gap here. Some drivers believe Autopilot really is fully autonomous. Others believe the system is so safe and advanced, that it’s ok to trick Tesla’s safety features, just letting the assistance system do all the driving.

While Tesla has taken steps to prevent drivers going all in on the car driving itself, the name “Autopilot” is simply too misleading for what the system really is. Tesla finds itself at an awkward halfway point between assistance and automation. Elon Musk and Tesla surely don’t want to remove the name “Autopilot” because it’s an impressive selling point for the fully electric car manufacturer. But with the public clearly in danger of misunderstanding what the system can do, “Autopilot” is dangerously close to misleading and false advertising.

How Much Water Does An Electric Car Fire Take To Put Out?

Electric cars are absolutely key to our eco-friendly methods of getting around. They’re not perfect for many reasons and our general dependency on cars needs to be reduced, but electric cars will play a part. That means we need to learn lots about them, far beyond how to use them on our roads.

Beyond the Autopilot features of Tesla, this particular crash provides another broadly concerning insight into accidents involving electric cars.

The fire burned for hours and took over 120,000 litres of water to extinguish. The reason for this is the battery cell within the car and the duration of burns caused by high-voltage lithium-ion battery fires. The energy involved can cause a car fire to continue and re-ignite over long periods of time.

The Dublin Fire Brigade has undergone training for hybrid car fires and is researching training for full-electric car accidents too.