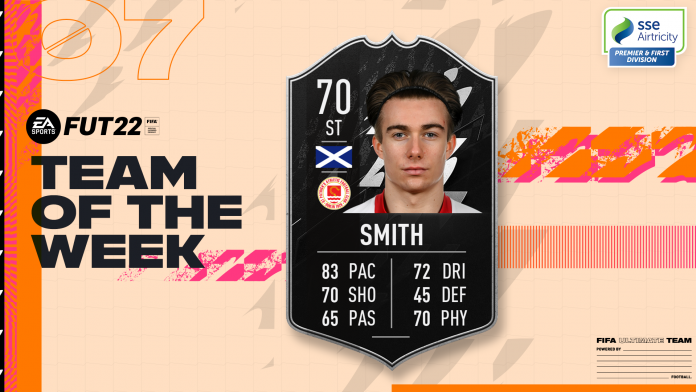 During the lockdown, I adopted St. Pat’s as my own. I’m born and bred in Kilkenny and followed the meteoric rise of Michael Reddy in person at Buckley Park back in the day. With the demise of Kilkenny City came a wandering eye to the Premier League until I started to watch some Pat’s games on LOI TV. Thankfully, Pat’s themselves are better to watch than the streaming service. Anyway, I digress from my point. This week, St. Patrick’s Athletic player Matty Smith has been featured in this week’s TOTW.

Smith, a Scottish footballer who played some youth football with Celtic before starting his professional career with Dundee United. In 2020 he moved to Waterford United, before transferring to St. Patrick’s Athletic this year. He’s scored 11 goals in 30 appearances so far this year, but it’s his last outing that earned him a spot in the FIFA 22 Team of the Week.

Smith lined out on the wing in a 4-1 win over Longford Town where he went one better than bagging a hattrick, and secured the “perfect hattrick”, scoring with his left foot, right foot and head.

Despite Longford already being relegated, the performance was impressive and hard-fought with The Saints going in just one goal ahead at halftime.

In the end, Pat’s were clear victors and Matty Smith the clear man of the match.

While scoring the perfect hattrick is pretty cool, if Smith is a big fan of FIFA, things got a bit better yesterday. EA Sports announced their weekly round-up of the most impressive footballers from around the world. Smith’s performance against Longford earned him a spot in this week’s FIFA 22 Team of the Week.

Over the years, a few League of Ireland players have featured, one of the most recent being Bohemians’ Georgie Kelly who featured in FIFA 21’s TOTW back in May.

Smith’s regular FIFA 22 card attributes him a 60 rating, with his new TOTW card boosting that to 70, his pace getting a massive boost from 73 to 83 and shooting from 57 to 70. His TOTW card is now priced at in or around 15,000 coins according to FUTWIZ. The accolade for Smith, see’s him rubbing virtual shoulders with Italy’s legendary Goalkeeper, Gianluca Buffon and Chelsea’s Reece James.

If you’re loading up FIFA Ultimate Team this week, be sure to check out the latest packs and see if you can grab Matty Smith, available now for a limited time.