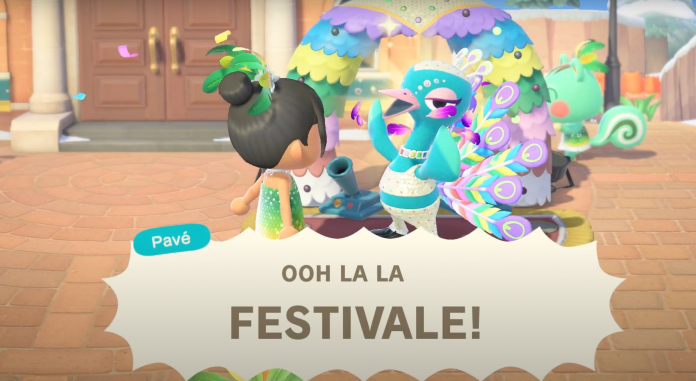 From Easter Day’s Zipper T. Bunny to the Harvest Festival’s Franklin, there’s been no shortage of familiar characters arriving in Animal Crossing; New Horizons over the last year. But it looks like it’s time to welcome back one more as Nintendo have confirmed Pavé is on the way in the new update.

The update — which will be available as of January 28 — will bring the dancing peacock back to your island for the Festivale celebration, which takes place on February 15. To be able to see Pavé’s colourful and festive dances, you just have to collect the different colour feathers.

It’s not clear what — if anything — he’ll give you in exchange. But we’re keeping our fingers crossed the Pavé series will be back.

There will be a new reaction set that players can purchase, too. The Festival Reaction Set can be picked up at Nook’s Cranny, and will feature new reactions Feelin’ It, Let’s Go, Viva, and Confetti.

The Able Sisters’ shop will also be joining in the celebrations, with Festivale clothing available in-store from February 1 (although you’ll have to be quick, because they won’t be around for long).

And there’s going to be plenty of non-Festivale items available. Players will need to keep an eye on Resident Services’ Nook Stop and Nook Shopping if they want to be able to get them, though.

Chocolate hearts and heart-shaped bouquets will be available to buy from February 1 until February 14. There’s going to be plenty of other items available related to Groundhog Day and Big Game Celebration available for certain periods during January and February.

At the end of the announcement video, Nintendo also teased what fans can expect from the March update — and it looks like it’s going to be Super Mario themed (mostly likely to coincide with March 10, aka: Mario Day).