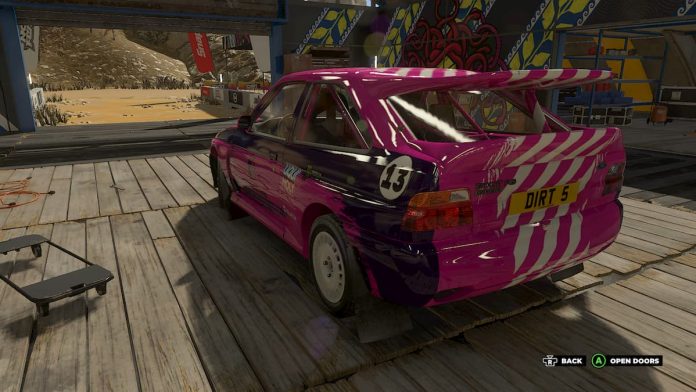 You learn a lot about a racing game when you’re halfway through the first corner. With F1 2020 it was realising I didn’t get the tyres warm enough while the other AI cars stuck to the racing line and braking points significantly better than I did. Forza was something similar and you know what, it makes sense when you understand that “car games” is really the umbrella term for a wider gaming niche. Dig deeper one more layer and you’ll find “racing sims” and “racing games”. While F1 2020 and Forza fall into racing sims the new Dirt 5 title from Codemaster is absolutely a racing game.

Dirt 5 is, rather deceptively, the eighth game in the Dirt series. It all started back in 2007 with the late great Colin McRae lending his name to the first Dirt game. The name McRae means everything when it comes to rally and rally gaming and knowing well that the lineage of Dirt 5 was founded alongside the legend of McRae, my expections were coloured fairly heavily. While I do understand where the game has come from, I’ve not played many of the Dirt series except for a few which were available on Xbox Game Pass and even at that, I dipped in and out as you do when you get free access to a game.

Ultimately, I thought I was about to step into a rally simulator. So much so, in fact, I was about to get out my Thrustmaster Racing Wheel and frame to go the whole hog. Now, I probably still will because that will 100% improve the craic but my point is that Dirt 5 absolutely is not a simulator. As I said, you learn a lot about a racing game halfway through the first corner and what that first corner in Dirt 5 taught me was I shouldn’t have braked.

In trying to attain the perfect controlled drift all my competitors drove off into the distance. I immediately got Tony Hawk vibes from the game. I wasn’t here to carefully drift my driver’s tyre over crests, I was here to gun it and never stop gunning it. A couple of races in and I’m going full Dukes of Hazzard over a canyon. Dirt 5 is not a simulator, it’s a game with a touch of arcade.

Is This The Real Life? Is This Just Fantasy?

I don’t want to take from Dirt 5 here either. As the game loads, you’ll see that there’s plenty of real automotive manufacturers who are properly licensed. Ten minutes into the game and I was a giddy kid buy my number two dream car, the Ford Escort Cosworth (number one was the Ford Capri which I bought in Forza). This isn’t total fantasy like you get with the racing modes of GTA 5 Online. It does borrow some of the madness that comes with not taking yourself too seriously but Dirt 5 doesn’t lose touch with reality either. Forza Horizon does that with loads of fake NPCs and a beach party-like atmosphere. There’s not of that here. When you place in the top three, it’s your car on the podium taking the plaudits. Because it’s you and the car, no-nonsense. Well, no excessive nonsense.

Dirt 5 doesn’t reinvent the wheel here. Your gamemodes are pretty expected. You get:

Career brings you through a series of races spanning Ultra Cross, Rally Raid, Land Rush and Stampede modes. There are some more unlocked later too but I didn’t get that far into the review. From the races I’ve raced all I can really say is that I drove them all with a smile on my face. At least I did after I realised braking points wasn’t something to worry myself about. What you will bother yourself with is trying to drift and overtake at the same time. Damn, it seems much easier than it is.

Online lets you pair up with friends or strangers in either races or party games. Races are races but party games is more along the lines of Rocket League. What online did make me realise is that while there’s plenty here because of different modes, each mode itself is a little on the light side with not much to sink your teeth into. While there’s buckets of fun to be had, there’s just a little innovation lacking.

Again, nothing too mad with arcade but then we get to Playgrounds. Playgrounds unlocked some serious nostalgia for me. It reminded me of when Tony Hawk Pro Skater introduced the park building feature or when Stuntman games let you build your own stunts. I played around in here for quite some time trying to achieve the impossible jumps in a Skoda.

What did you come here for? If you’re thinking of buying this game you really only have to ask yourself one question. Do you like a bit of craic and drifting the tyres off some cars. If the answer is yes, Dirt 5 is for you. While they’ve not really injected anything insanely innovative here, they’ve made a joyful mucky romp of a game. If it’s a sim you’re after and you miss the navigating voice of Nicky Grist, well maybe there’s something else out there for you in the land of the sims.