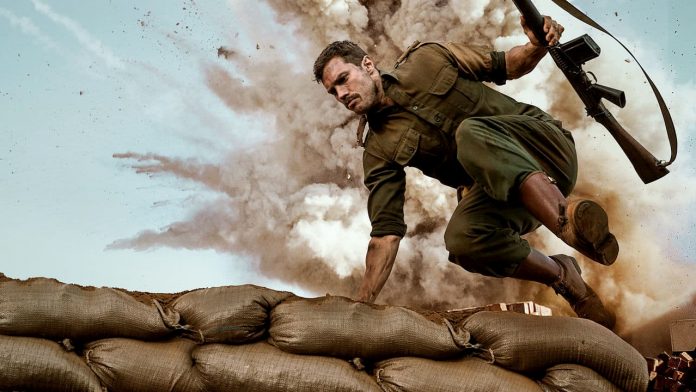 It’s nearly St. Patrick’s Day! You know what that means! Staying in, social distancing and watching Netflix. It’s going to be a St. Patrick’s Day like no other but it’s crucial that we all just chill out and stay home right now. What better to do when you stay home than to stream a hape of Netflix. For the day that’s in it, why not find something Irish-themed?

Now, this isn’t all made in Ireland, by Irish directors, writers and actors for the benefit of the Irish people. It’s just got a tinge of green in it or depicts Irish legends.

The Siege of Jadotville

Ireland’s greatest backs to the wall defence either came in Italy or Jadotville. The Siege of Jadotville sums up what’s deep down in all of us. That incredible Irish pride that leads to goosebumps when we watch Houghton score.

The Siege of Jadotville tells the true story of Irish Soldiers who were besieged by overwhelming enemy forces while on a UN peacekeeping mission in the Congo.  The heroes led by Commandant Pat Quinlan fought for five days and heroically defended their outpost. These men were disgraced for surrendering and disobeying orders until very recently. When you watch this story unfold, you’ll be ready to go fight alongside the Defense Forces.

I don’t even want to use the word arguably. Katie Taylor is Ireland’s greatest ever sportsperson. Watch her story in this critically acclaimed documentary. Intimately follow champion boxer Katie Taylor as she attempts to rebuild her career after a year of turmoil threatened to derail her career. With many writing her off, Taylor decided to start again, and the notoriously private champion agreed to let a small crew document her attempt to rescale the heights.

When you grow up down the country, you do get a little tired of seeing everything on telly be based in Dublin. I think that’s why The Young Offenders has even more appeal for many people in Ireland. With that said, it’s a bloody hilarious show in its own right. This feature-length movie follows the two lads as they steal bicycles and set off to the coast to find a bale of cocaine from a smuggler’s capsized ship.

Bad Day For The Cut

I’m still shocked more people don’t talk about this. Bad Day For The Cut is a really dark movie which always reminds me of Falling Down. The story follows a mild-mannered, middle-aged Irish farmer devoted to his mother. It all turns when he embarks on a violent quest for revenge when she’s murdered in a home invasion.

Really dark, lots of violence and most importantly it’s a really compelling story.

This is down as a movie, but being honest, you’ll be doing well to sit it out in one go. The Irishman is a brilliant depiction of hitman Frank Sheeran’s life. This movie looks back at the secrets he kept as a loyal member of the Bufalino crime family in this acclaimed film from Martin Scorsese. It’s a good movie, but many heralded it as one of the gangster movie greats. I’m not convinced. Still a worthwhile watch mind.

Not going to lie, I’ve not watched this yet. However, it’s my first movie of choice for Paddy’s Day. I know there’s a link to RIOT! which blew me away. Twice!

Over a lost weekend, a drugged-out DJ reconnects with his estranged brother and sees where his hedonistic lifestyle could lead in the end.

I remember the movie poster being stunning for this movie. It stuck with me so long that scrolling through Netflix one day the movie jumped out at me. I’ve never seen “taking the soup” depicted as perfectly as Black 47 does it. There you have it. A quote that will never make the side of a Dublin Bus that absolutely should have.

When the Great Famine ravages his beloved country, a battle-hardened Irishman deserts the Great British Empire and exacts revenge on the tyrants responsible.

The Best Irish Stuff On Netflix: TV Shows And Series

Again, this is just Irish-themed stuff that comes in bite-sized chunks rather than big long features. But, there’s nothing stopping you from binging the whole lot in one go.

You’ve already seen it. Surely, you’ve already seen it, right? If not, this is the biggest no-brainer on St. Patrick’s Day when you’re looking for Irish stuff to watch. Derry Girls follows a group of teenage girls living through the Troubles in the early 1990s. It’s not a recipe for comedy at all, but it’s one of the funniest things on Netflix.

Well, for the day that’s in it, it’s mandatory. There’s no tomfoolery here mind. I Am Patrick is a look back at the life of our patron saint, St. Patrick himself. This docuseries brings the story of Patrick to life, from a kidnapped slave to becoming the face of a nation.

This might be back to my culchie comment again, but I love stuff not based in Dublin. The Hardy Bucks is just one of the most iconic Irish shows because of it’s stupid humour and surprising quotability. Now, Netflix has four seasons of these lads trying to turn a coin for cans and craic. All while living in a wee town in Mayo.