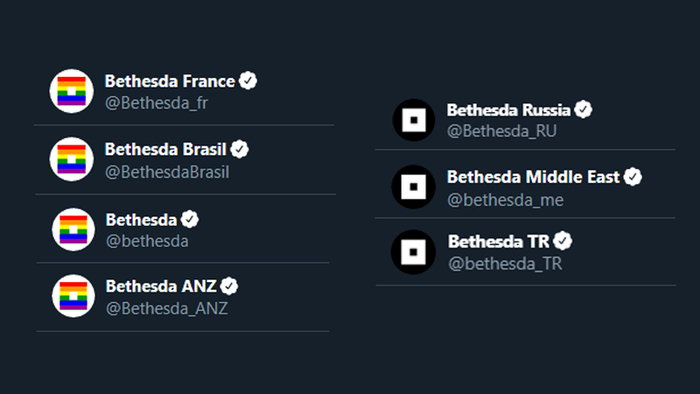 A quick article just to ask a question. It’s Pride Month. You’d be forgiven for forgetting that this isn’t a month for large companies to celebrate rainbows. Pride Month is of course a celebration of our LGBTQI+ community. It’s shining a light on society’s failure to accept members of the LGBTQI+ community, the struggles they faced in the past, and to act as a reminder that those days aren’t in the past. Today, friends, family and colleagues in this community still face oppression. Last year, Bethesda has made that nice and clear.

As I mentioned, during Pride Month, companies often change their logos to show they support inclusiveness. We’ve done it for Goosed.ie in the past while also raising money for Pride charities.

The game studio, Bethesda, which was recently bought by Microsoft, did this for their Twitter profiles in lots of countries last year, including their primary corporate account. However, as highlighted by Jessica (@bananapixelsuk) on Twitter, they missed some accounts.

super excited for brands to support Pride but only in places where it's popular with their customers !! pic.twitter.com/nvkd7byoB1

Now while it appears that some people are getting mixed up by the timelines here, there’s something worthy of note.

Last year, the accounts for Bethesda Russia, Bethesda Middle East and Bethesda Turkey remained with the standard logos. Why? Well, these countries and regions remain largely oppressive of the LGBTQI+ community. I’ve spoken to friends on this who enlightened me to the fact when they book holidays they must check local laws. While Ireland has become somewhat accepting of the community, outside of our borders may not be so welcoming.

Have they learned from their mistake? Well, no. The idea of Pride is to show support for those members of the LGBTQI+ community who need it most. To insist on change for tolerance. I use the word “tolerance” reluctantly because that’s the lowest possible bar for what should be expected.

Russia has laws against the publication of “propaganda of non-traditional sexual relationship” and that’s exactly what Pride Month should be seeking to challenge. If you’re not willing to support Pride in Russia or other conservative countries, the minimum you should do is just stay out of it.

Bethesda remains in the “we’d like to show our support of Pride where it suits us” camp.

I guess they learned their lesson… of only changing the main account to rainbow colors lol pic.twitter.com/po0zbrH56A

So if you see your favourite brands supporting Pride, I ask you to question just what exactly they’re doing to drive change.
Ads To Pay The Bills