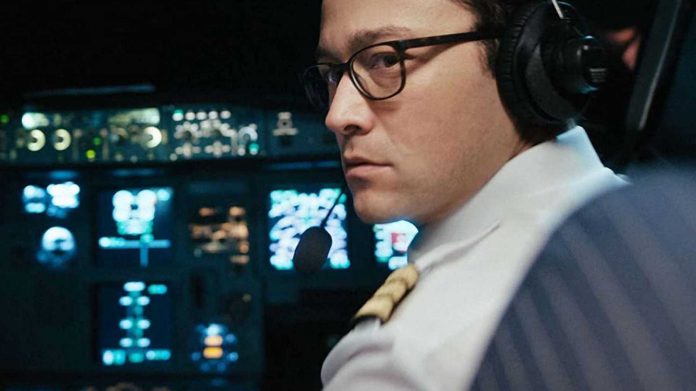 I’m a sucker for things to do with planes. Flight simulator “games”, Air Crash Investigation shows and movies like Flight with Denzil Washington. Hook them up to my veins. I was surprised when scrolling through Amazon Prime that there’s a new movie called 7500 starting Joseph Gordon-Levitt that I hadn’t heard of. So I hit play.

Gordon-Levitt plays first officer Tobias Ellis. A pilot with ten years flying experience setting out on another routine flight between Berlin and Paris. Flying nerds, and pilots I guess, will recognise that the movies name, 7500, is the transponder setting for pilots to indicate an aircraft hijacking. Indeed, 7500 is about terrorists attempting to take over a plane. More accurately, 7500 is about how Gordon-Levitt’s character handles the situation and the terrorists.

There’s added emotion involved as, without the terrorist knowledge, the co-pilot’s partner is also an air steward on the same short-haul flight.

Spoilers ahoy. This is a review so I gotta mention what happens. Stop reading if you want to watch this movie on Amazon Prime Video.

The movie opens silently with security footage tracking passengers through security. Immediately, video footage which emerged of terrorists post-9/11 comes to mind. As the movie moves beyond the intro, the cockpit is set up as being the primary location for the story. The camera sits inside the cabin, inside the secure door, looking at the pilots’ controls. With the exception of earlier security footage and a shot from the flight deck looking down the plane, the only other sight out of the cabin is through a camera. The camera is used by pilots to identify people attempting to gain access to the flight deck.

After some typical ground checks and some pilots’ humour about two late passengers, the flight takes off as expected. As the cabin crew bring the pilots their meal, terrorists rush the cabin. After a brief struggle, the co-pilot secures the door again. The captain has suffered fatal wounds, the co-pilot is injured, some terrorists remain locked out of the cabin while one remains inside unconcious.

The passengers disembark but the co-pilot and terrorist remain, Vedat trying to plot a way out. Ultimately, there isn’t one and after threatening the co-pilot with a knife, police snipers take their shot through an open window of the cockpit.

The movie ends with the co-pilot stepping past his dead partner with the camera in the passenger cabin staring back into the cockpit.

7500 is bloody tense. It’s also shot brilliantly. I enjoyed the movie myself and could feel my heart racing throughout. So, on the surface – yeah, it’s good. But I always like to dig a little deeper into what I’ve just watched and see what the director really wanted to tell.

This feels lazy at first. It’s another mid-air hijacking where the terrorists are Muslim avenging the crimes of The West. Initially, I tutted in my own head. But as it unfolds, the movie appears instead to be challenging the belief that all extremists can’t be neutralised peacefully with words and listening. The terrorist shows a conscious and his remorse is apparent even when battling with self-preservation. But when Vedat is taken down by a sniper, it’s hard to really understand what the director wanted to achieve.

The co-pilot tries to stop the bleeding from the gunshot wound, but really it seems more to be Stockholm Syndrome than an attempt to address any serious misconceptions about extremism lacking humanity at a deep level.

Gordon-Levitt himself stated on Twitter that the movie is about the “controversial and often oversimplified narrative involving prejudice, extremism, and how the dehumanisation of ‘others’ can perpetuate a tragic circle of violence”. To be honest, I don’t buy what the director is selling here. If he’s going to create a terrorism movie with this kind of goal, he needed to work harder on the story he wanted to tell.

While that first hurdle is huge, even after dissecting the movie, I feel I did enjoy it. And that’s mainly down to how tense a thriller it is.

The movie is void of any soundtrack beyond the hum of jet engines and familiar dings that passenger airliners routinely make. It’s all about the atmosphere. The opening shot is almost claustrophobic, showing how tight the cockpit is for space before all the drama takes place here. It’s not accidental that the final shot takes place outside the cockpit looking back in giving the viewer some deserved breathing space when the obvious conflict is resolved. The style result comes as a result of the director’s deliberate shooting approach. Gordon-Levitt said on Twitter that they “wouldn’t stick to script, wouldn’t stick to marks, would just leave the camera rolling and stay in character for these long stretches of time. It was extremely challenging but deeply rewarding”.

Our Relationship With Technology

Some of the themes to emerge, like extremism, are obvious. Others are more subtle. Not for the first time, I’ve spotted a few things that give a nod towards our difficult relationship with tech as a theme. More specifically, the movie looks at how technology is an often negative medium between us and our goals or a barrier between us and control. You might think I’m reaching but check it out.

For the flight crew, there’s no connection to the rear of the plane during the flight and the attack except for the video intercom. The video intercom also provides a mirror for the viewer to consider their own position in society. The co-pilot turns off the video stream just before a terrorist murders a passenger in an attempt to force the co-pilot to open the cockpit door. Naturally, while refusing to open the door is for the greater good of the plane’s safety, it also acts as a metaphor for the public turning their back on news of atrocities.

There are even more examples of tech coming between humanity and control. The co-pilot can only get advice from air traffic control or an invisible police officer we never meet over a radio. At the start, even the co-pilot’s partner says she just had a call with her mother and found out they didn’t get a kinder garden place. Another phone call between a terrorist and his mother confirms to him that there’s no going back.

The plane he’s flying is a model of Airbus which flies a side-stick, not centre-stick like we’d all be typically used to seeing. Airbus planes are disliked by hardcore traditional pilots because of their flight controls. Instead of hydraulics directly connecting pilots to flight surfaces, it’s all electronic. This leaves pilots often second-guessing, fearing a “ghost in the machine“.

That’s a very specific one but there are some more obvious examples of tech as a negative medium.

To support all of this, the non-direct interactions are juxtaposed with one genuine human interaction between the captain and ground crew who know each other years. This face to face connection visibly means a lot to the captain in comparison to two passengers who are late, reduced to the pilot as being a nuisance delaying the flight. The terrorist, Vedat, is unsure what to do during the attack and eventually “does the right thing” once he has a face-to-face connection with the co-pilot, albeit while also saving his own life.

Ok, that’s my ramble complete. The movie is tense. While there are some lazy tropes that, with a little bit of creativity, could have been avoided, all-in-all, this is a good return to the big-small screen for Joseph Gordon-Levitt. In his first movie since 2016, he’s managed to shoot something a little different in style if not substance.

Stream 7500 on Amazon Prime Video
Ads To Pay The Bills