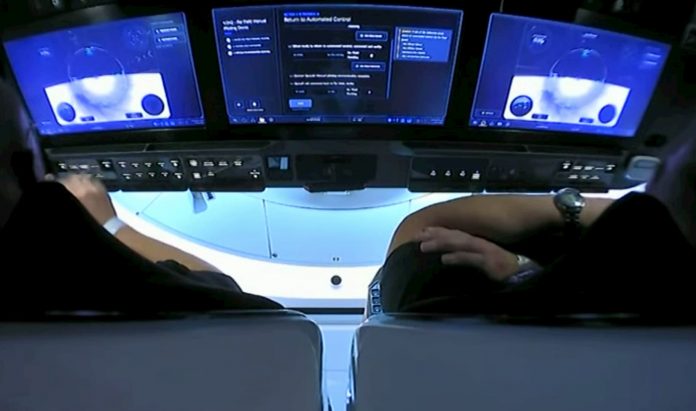 It’s been a day to recapture the imagination when it comes to space exploration. SpaceX and Nasa have together put humans into space on a new vehicle. The SpaceX designed and Nasa crewed Crew Dragon is currently undergoing a demonstration flight. This flight will involve docking with the International Space Station (ISS) and you can test your own ability to complete part of the mission.

One thing stands out about this entire SpaceX mission. It’s very consumer-friendly. The obvious goal of it all is to normalise space travel and that is blatantly obvious. The Crew Dragon, with Bob Behnken and Doug Hurley on-board, is the first manned SpaceX mission. While these two men are fully qualified astronauts, technically, this mission could be flown by anyone.

The Crew Dragon spacecraft has been designed with regular users in mind. Just look at it.

Capable of carrying 7 passengers, the simple touch-screen controls and bucket-seats are more akin to a Tesla Model X than a spacecraft. And that’s very deliberate. Elon Musk, the founder of SpaceX, is very much planning for Crew Dragon to ferry somewhat regular people to space.

The most amazing part of this is how Crew Dragon is controlled.

This blew my mind. The Crew Dragon is designed to be fully automated. While the crew on-board this mission headed for the ISS are astronauts, there’s nothing stopping Musk slapping me into Crew Dragon and sending me airborne. Well, except for the limitations of how much arse those seats can take.

The whole flight is designed to be automated. This includes the docking manoeuvres with the ISS. However, Crew Dragon also has manual controls which the crew aboard can use to take control and fly themselves. Now, if you’ve seen the movie Apollo 13, you probably assumed these flight controls involve taking a stick in the hand. Not on this ship.

When the crew go to manual controls, they just use a touchscreen to input signals and steer the Crew Dragon spacecraft. To see something so technical be controlled by a touchscreen which could as easily be sitting on a Tesla Model 3 is simply mind-boggling.

SpaceX is going through great pains to make space exploration feel rather normal. In fact, they believe it’s so normal that they’ve treated an ISS Docking Simulator which is based on the very controls you can see the Crew Dragon crew using.

Over on the SpaceX website you can test out your own docking skills and take control of a virtual Crew Dragon simulator. This simulator lets you test your skills at piloting the Crew Dragon and docking with the ISS. Looking over the crews’ shoulders to see the touch screen manual controls and testing out the simulator, it’s quite remarkable how like for like it all is. Now, piloting in space isn’t all that easy, but still it’s a really cool idea from SpaceX who are really trying to make all of this more normal, fun and exciting.

For some bonus reality, try it out on your phone or tablet so you can get the full touchscreen experience of piloting that Bob Behnken and Doug Hurley are getting.

What is the SpaceX ISS docking sim?

This simulator is based on the actual interface used by NASA Astronauts to manually pilot the SpaceX Dragon 2 vehicle to the International Space Station.

How do I control the Crew Dragon using the simulator?

How do I dock with the ISS using the SpaceX simulator?

To successfully doc with the ISS you must get all green numbers in the centre of the interface below 0.2. It’s important you keep an eye on your rotation too.

I keep crashing using the ISS docking simulator. Any tips?

Take your time. Movement is space is slow and you need to take your time and use delicate inputs.

Did SpaceX create this ISS docking simulator to recruit pilots?

Maybe Elon is watching so if you get it right, you might be a pilot yourself some day!

When will the Crew Dragon be docking with the ISS?

The Crew Dragon will be attempting their real docking manoeuvre with the International Space Station at 15.29 Irish time or 14.29 UTC.

How can I simulate the ISS Crew Dragon docking process?

SpaceX has a simulator available on their website. It bares as uncanny resemblance to the real Crew Dragon controls in terms of looks, but in terms of handling you’d need to ask he real crew.