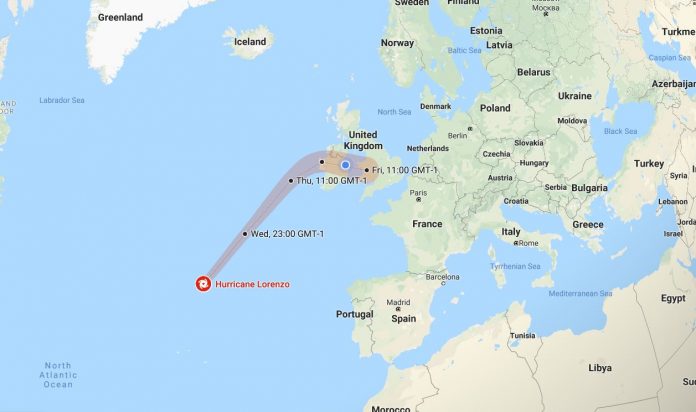 One of the most impressive things that Google has developed over the years isn’t there search engine. At least, for me it’s not. To me, it’s Google Maps. With Google Maps, we have a tool which can quite accurately estimate journey times based on live data from real users and even offer you an alternative, faster route. It can find places of interest nearby and even help you remember the route home you took after a few pints the night before. Live location sharing is one of the top tips I’ll give anyone who’s looking for a safe trip home alone on a night out.

Today, Google announced that you can also track Storm Lorenzo with Google Maps. See, it’s the talk of the town and I just found a tech angle!

What is Storm Lorenzo?

This is not our area of expertise at all, but Storm Lorenzo is a big gust of wind heading towards Ireland later this week. Being a little more serious, Storm Lorenzo is currently a category 1 hurricane set for landfall in Ireland over Thursday and Friday. Lorenzo was previously a category 5 hurricane, which initially meant nothing to me. However, when you realise that there’s only ever been 36 recorded category five hurricanes in history, it becomes clear why Storm Lorenzo is a bit more newsworthy than most lashings of rain that we get over here.

It’s also the reason why Met Éireann has issued orange wind warnings for six counties and a nationwide yellow warning. So, now that you’re regretting all those times you laughed at Doomsday Preppers on the telly, here’s how you can track Storm Lorenzo with the incredible technology of Google.

Google has started tracking Storm Lorenzo in Google Maps. That means you can now nip into that link and follow how Lorenzo is getting on. It also shows projected areas of the storm’s landfall in Ireland and the United Kingdom.

Will I Get Off Work Because of Storm Lorenzo?

I’d say there’s a chance. Now, I’m no meteorologist, but looking at Google Maps, the bulk of the country is going to get lifted out of it. Buy a load of snacks and white bread, just-in-case. If you can, bring the laptop home from work and take the “I better work from home” option while binging on Netflix.

Knuckle down lads and keep an  eye on Google!