Home Tech news Gadgets Nokia 1.3 Review – Budget Smartphone That Might Be Better Than You... 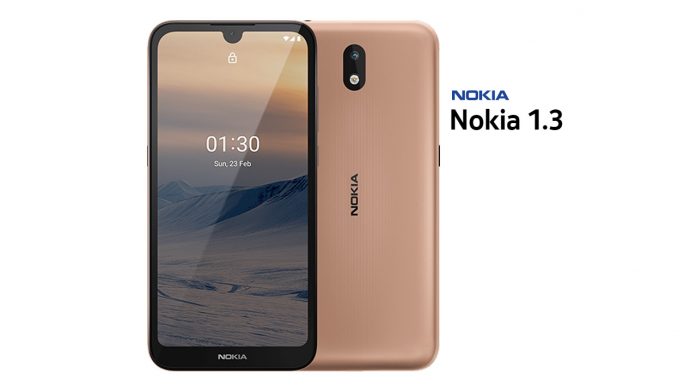 Nokia, the name just brings back memories of sturdy, sexy, simple phones from yesteryear. They still make phones for those of you know and if you are in the market for a cheap, like seriously cheap smartphone that’s under €100 then the Nokia 1.3 might be just what you’re looking for. Not long ago it would be crazy to think that a smartphone under €100 would be worth buying but with a better than expected screen, compact design and a decent battery the Nokia 1.3 is quite possibly the best value budget phone in the market. So if you’re hunting for a second phone, something for holidays & festivals or it’s someone’s first smartphone the Nokia 1.3 may just be the perfect pick. Let’s dive right in and see what we are working with….

What do Nokia do best? Build a simple and sturdy product, we all know this. The Nokia 1.3 is no different, with a simple design, robust plastic chassis and basic, symmetrical layout to the front and back. The Nokia 1.3 even includes the 3.5mm headphone jack as well as a removable back case which excuse my French, which is a bastard to remove, which hides the battery, something we haven’t seen in smartphones for a while.

Speaking about the back of the phone, there is a little instruction manual in the box that shows you how to take off the back, but if like me you have short nails, best of luck with that. I considered giving the brick a boot to get it off before logic dictated and I used a short flat head screwdriver to remove the back. Judging by other reviews I’ve seen online, I feel a bit relieved that it wasn’t just me with the issue.

The Nokia 1.3 also has a 5.7″ glass coated display with slim bezels and rounded corners with a neat semi circle notch at the top that houses the front facing camera.

Under the bonnet we have our sim slot and microSD slot, and nicely you don’t have to remove the battery to pop in the sim, you don’t even need a pin with a sim drawer that feels like something from 5 years ago. Only downside is, best of luck getting the sim back because and trust me on this you will need patience to remove it from the Nokia 1.3 without causing any damage.

Finally we are running with microUSB rather than Type-C which seems a bit odd but it really just means there is no fast charging option and you also get a 3.5mm headphone jack which you just don’t see anymore.

With a screen size of 5.7″ is a grand handheld size and smaller than what’s almost become the now standard 6″ displays. I really think the display is the best part of the Nokia 1.3 that performs way above what one would expect from a phone of this price. The screen is great under sunlight but will take a moment to register the brightens when outside before the display sets the brightness accordingly and it got an IPS panel which means good viewing angles. Also the HD+ resolution on a screen this size has a pixel density of 300ppi which is about the same as a Kindle, AKA not bad, not bad at all/

We like the battery on the Nokia 1.3. It’s rocking a 3,000mAh battery which is more than acceptable at this price point. Given that someone who uses this phone would be considered a light user, chances are they won’t be as punishing as I am on the old battery that I needed to charge about midway through each day….Spotify and test running bluetooth headphones will do that to be fair. With that in mind it got me through the work day alright but would need a juicing if I had anywhere to be in the evening as the Nokia 1.3 would finish the work day hanging on for dear life.

Again to put this in context, the phone is never out of my hand and most people will get the day or at least most of the day out of the phone before it needs a charge. Based on standby time alone, the battery was able to last just over two days. All in all impressive, especially with the price in mind.

Under the hood the Nokia 1.3 hosts a Qualcomm QM215, quad-core 1.3 GHz chipset, 1GB of RAM and 16GB of internal storage, which realistically you will need to expand with a memory card. Its the base of what one would expect from a smartphone these days and it means that the phone a tad on the slow side. Not so bad mind you that you will want to hop the phone out a window but just don’t expect to jump quickly between screens or the apps you’ve got open. With that in mind, the phone comes loaded with lightweight ‘Go’ versions of apps such as Gmail and Google Maps, designed to reduce the load.

As you may expect from a sub €100 phone, there ain’t a whole lot to write home about in the camera department. For me I keep reminding myself of the price rather than trying to compare this to a big flagship product like the Samsung S20. The main camera on the Nokia 1.3 is a single 8mp camera with flash and auto focus while the front facing camera is a simple 5mp. To be fair that’s as good as anyone can expect and both the front and back can record in 720p at 30fps but without image stabilisation you gotta keep that handy steady and try not record something after your 4th can of Monster in a day.

The Nokia 1.3 also has an 8x zoom but the results are a little grainy and the portrait mode can add a fake bokeh effect. The shutter speed is a bit on the slow side so have some patience but I got a couple decent shots using the portrait mode. As I said nothing ground breaking but definitely as you would expect at this price point.

The acoustic performance is pretty much grand. It won’t blow you away by any stretch of the imagination. Both hands free and the loudspeaker pack enough punch that you won’t have too much issue with the audio and the addition of the now retro 3.5mm jack is a big plus, especially at this price point.

The Nokia 1.3 has a hardware button located on the left side. This will launch the Google Assistant which can answer questions, save notes and all that good stuff and it’s a feature normally reserved for a slightly more expensive phone.

Of course any extra bells and whistles are kept down to a minimum on a phone at this price: there’s no wireless charging, no fast charging, and no waterproofing.

To be real, you won’t need me to tell you that something like a Huawei P40 Pro is an infinitely better phone than the Nokia 1.3 but it’s also 10-15 times the price. When it comes to a phone like this we need to take the fact that its a smartphone for under a 100quid. The Nokia 1.3 pretty much beats expectations for a phone so cheap.

It’s got a screen much better than you might expect at this price, solid battery life and a compact design but the occasional lag can be a bit of a nuisance and it’s the phones major let down. If you plan on messaging, browsing and that’s really it save your money on the iPhone and spend the savings on a staycation. Seriously though the Nokia 1.3 is about as cheap and basic as you can get in a smartphone and it delivers everything that can be expected and it’s sturdy build which is just typical Nokia should help is last the test of time.

Granted it may lack a little performance wise but the wee little Nokia 1.3 will send messages, take photos and browse the web for you, and run most apps satisfactorily. You can definitely tell you’re using a budget phone with the Nokia 1.3, but in terms of value for money, the Nokia 1.3 is a winner in my books.