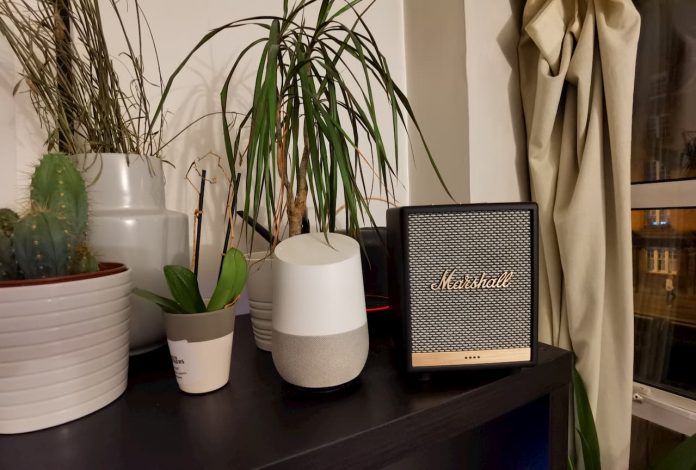 It feels like you can buy anything and everything with a Google Assistant built into it now. Looking around my sitting room, I have a Google Assistant-powered soundbar, a Google Home in the kitchen and Google Nest Wifi which has an assistant in the bedroom too. In such a small space adding another smart speaker meant it needed to be different. The Marshall Uxbridge landed on my desk for review and I fell in love immediately.

I need to get this out of the way early. I’m totally biased in this review. Back in the day, I used to be in a band. I didn’t have the best gear in the world. My guitar was a Fender knock-off, my amp was a fourth hand little-known brand and my effects peddle, well I actually invested in a really good peddle. We used to do the odd gig, starting off playing at a teenage disco where I forgot the words to a Blink 182 song. A year or so later we were playing proper gigs where the headline act brought their rigs and we just plugged in. Here was when I fell in love with Marshall.

I was plugging into a Marshall half stack amp. Even if that means nothing to you, you probably know what I’m talking about. These are the guitar amps that feature on most rock stage concerts.

Isn’t that pretty. The funny thing about that gig where I got to plug into this for the first time was that I nearly blew the thing up. My really good peddle was turned up to ten and so was the amp so when everything got connected, everyone in the room gasped because of the deafening squeal. By the time the Mike Got Spiked guitarist made it to the stage everything was fixed and I was laughing away to myself. He wasn’t.

But that’s the amp that I fell in love with. I never got to own one, but this is what made my super biased when opening my Marshall Uxbridge smart speaker.

Marshall has started to produce several smart speakers in different sizes. The Uxbridge is one of the most living room friendly designs. While it’s quite small and nowhere near the size of the speaker on the stage of rock shows, the sound is brilliant. It’s not the most remarkable speaker on the market but given the relatively small size of the box the sound outperforms expectation. I’m sure there are plenty of audiophiles out there who will dismiss the audio quality, but this is bringing charm and sound to the table.

What it may be lacking in sounds for some, it may make up for with connectivity. The Uxbridge comes in two different models, so be careful to pick the one that best suits your own setup. The one I tested is the Google Assistant-powered speaker but it can also be bought with Alexa brains. The two speakers are not interchangeable, so make up your mind and stick to it. You can connect directly to the speaker by Bluetooth but most will play tunes by asking their assistant to play from Spotify or another music service. If you live in an iOS world, you’ve also got AirPlay too.

At the outset, I said it feels like everything can be bought with a smart assistant built-in, and I stand by that. In this case, the assistant is installed in a bit of nostalgia and great design. There are plenty of other speakers on the market which will deliver equal, if not better, sound quality. But few will look as awesome on your shelf as the Marshall Uxbridge smart speaker. The Google Home itself is a great speaker but it’s design is a bit vanilla.

You can pick up the speaker for about €200 straight from Marshall. If you’re after an Alexa-powered speaker you might even save a few bobs on Amazon.